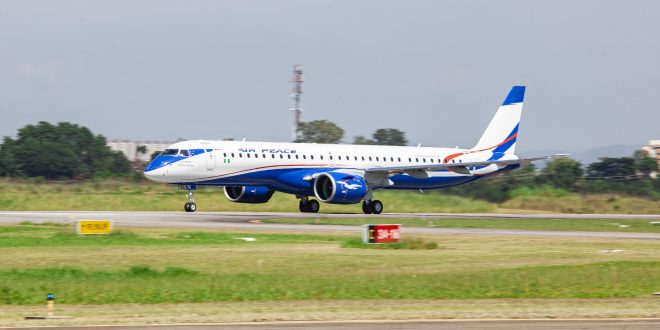 Air Peace has announced passenger figures of 55,821,258 in the last eight years of its commencing flight operations with renewed promises to provide seamless domestic, regional and international connections to Nigerians and other Africans through strategic route expansion, increased network options and modern fleet expansion.

Chief Operating Officer, Air Peace, Oluwatoyin Olajide, stated that airlifting over 55 million passengers in just eight years is a giant stride and a testament to the steady growth trajectory of the airline.

Olajide said,”When we launched in 2014 with a record fleet of seven aircraft, we had a future-proof blueprint, driven by the vision to reduce the air travel burden of Nigerians through the provision of safe and world-class flight services.

“To achieve this, we strategically invested in the right kind of aircraft, factoring business sustainability and customer experience while also hiring and training the best technical manpower to drive the process.

“Now, we have 38 aircraft and are still expecting 8 brand new Embraer 195-E2s from our firm order in 2019 and additional 15 brand new Boeing 737 Max 8 and 10 Order,  as we ramp up plans to strengthen our operations to serve our esteemed customers better. We are also expecting some of our aircraft undergoing maintenance overseas and by the second quarter this year, they will start returning.

“We are extremely grateful to our customers and other critical stakeholders for their support and urge them to keep supporting Air Peace. We promise to further inter-connect more cities across Nigeria and beyond and improve in our service delivery”, Olajide asserted.

She disclosed that the airline is planning to launch London, Israel, India, Congo Kinshasa, Togo and Malabo this year, adding that more frequencies will be added to Accra, Monrovia, Freetown, Banjul and Dakar routes with more connections introduced locally.

Nigerianflightdeck is an online news and magazine platform reporting business stories with a bias for aviation and travel. It is borne out of the intention to inform, educate as well as alter perceptions with balanced reportage.
Previous Civil Aviation Policy review welcome development as no nation builds itself- Captain Mshelia
Next Air Peace claims sabotage as ground incident causes flight disruption, NAHCO disagree on sabotage