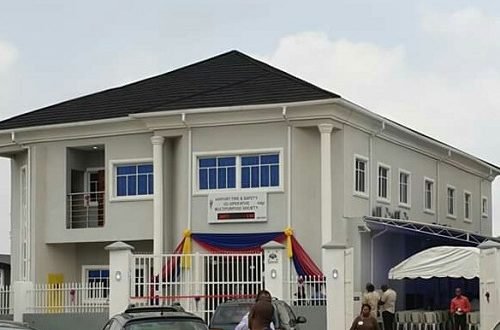 MEMBERS of the Airport Fire and Safety Cooperative Multipurpose Society (AFSCMS) have unveiled its N100m secretariat at the airport over the weekend with plans to build its proposed ultramodern Hotel at Beesam in Lagos.

The Secretariat was unveiled by Managing Director, Federal Airports Authority of Nigeria, Captain Hamisu Yadudu represented by the General Management, Environment, Mrs. Omere Janet who charged to members to continue to uphold integrity in the discharge of their duties.

Yadudu commended the AFSCMS executives for fulfilling their promise to members for a better working environment where they would meet and discuss issues in moving the cooperative to greater heights stating that the cooperative had given members relief and had helped them and had made the workforce stronger.

“This edifice is worth celebrating knowing what it was before it was demolished and now we have this beautiful building here. I thank all the management of the cooperative for what you doing, we expect that more innovation will come particularly with this new edifice, we have a good place to answer to all staff and a good working environment”.

“It has brought relief when you have a worthy cooperative that they can really run to, it makes the workforce to be strong and I will only ask that integrity for which you are known to please continue so that people will be motivated to continue, we have more membership because I know over the years there has not been any problem of embezzlement or corruption. Since you have built this cooperative on integrity he (Yadudu} expects you to continue in that form”.

The President of AFSCMS Mr. Richard Tella, speaking on the investment of the Society shortly before unveiling, said work would soon commence at the cooperatives proposed ultramodern Hotel at Beesam in Lagos.

He also said that N300m had so far been paid for the acquisition of the Cooperatives Housing Project at Agbara, Lusada in Ogun State, assuring that payment of the project would be concluded early next year .

According to Tella, the ultramodern secretariat was conceived as a result of structural defects noticed on the old secretariat and the cooperative decided reconstruct in order to ensure safety.

He explained that the new building would provide more space for materials and comfort for workers of the Cooperative.

With over 4,000 members across various aviation agencies, Tella disclosed that Air Peace workers would soon join the cooperatives and the modalities were currently being worked on, adding that the opening of the edifice was a sign of good things to come.

He urged members to remain dedicated and supportive assuring them of better programmes ahead.

Also speaking in the same vein, the General Secretary of the society, Alhaji Sadiq Saheed, explained that the interest of members remained paramount and that the society was out to assist the needy in terms of welfare.

Sadiq said many members have benefited from the cooperatives through loan facilities which had enabled them to own their houses and other personal belongings.

The cooperative scribe described the inauguration of the secretariat as key, timely and a pride to members of the cooperatives society.

Sadiq said, “the executive is on top their game in terms of taking care of members. I urge members to keep hope alive as they will never be disappointed but we will add value their life”

Nigerianflightdeck is an online news and magazine platform reporting business stories with a bias for aviation and travel. It is borne out of the intention to inform, educate as well as alter perceptions with balanced reportage.
Previous Onyema says ‘it’s premature to cancel Boeing 737Max 8 orders’
Next Minister inaugurates EOC in Kaduna, remodelled terminal in North East Maiduguri