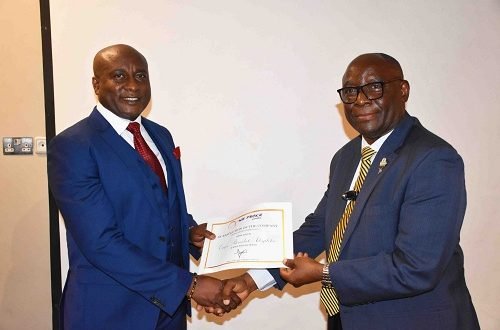 CHAIRMAN of Air Peace, Chief Allen Onyema has said it is premature for the airline to take a decision on cancelling its 737 Max 8 order stating that the airline still has time to decide

This is just as he insisted that there is a gang up against Nigerian airlines in the West African sub-region stating that the airline has lost N1.2 billion in the last year to operational cost of doing business in the region.

Onyema made this known on Wednesday when the airline Inaugurated its Board of Directors consisting of very notable and trust worthy Nigerians.

On the Boeing 737 Max 8 orders, Air Peace had made a record-breaking firm order of 10 aircraft in 2018 with the aircraft scheduled to start arriving in 2023. However, there are hues and cries after the aircraft crashed in October 2018 and March 2019.

Onyema while giving his thought on the Max said, ” The Max 8 is a good aircraft, revolutionary. Getting over 5000 orders in just a short while until the accident.

“People are going to ask about our orders of those aircraft at this event so let me just say so now and get it out-of-the-way. The Max is a good aircraft and despite what happened, it is premature for Air Peace to take the decision to cancel the Boeing 737 Max 8 order. It takes time to get those aircraft done and ours are supposed to start arriving 2023/2024, before that time we believe any issue with the aircraft would have been solved.

” We will wait to see the report of the investigation of the previous crashes so there is time to make those decisions,” he said.

He added that from 2020, the airline would start receiving its E195 regional jets from Embraer stating that the cargo hold which was small has been addressed.

Air Peace is the launch customer for the E195 in Africa and Southern Europe.

Chief Onyema who spoke on the unfortunate trend in the West African sub-region stated that government needs to get in the game to play aero-politics as the country is being over ridden.

He said that most countries protect gang up with their airlines to protect them against Nigeria, doing all they can with their government’s backing to frustrate Nigerian businesses out.

According to the airline Chairman, even the much touted Single African Air Transport Market ( SAATM) is geared towards fleecing the Nigeria market and stunting its aviation industry growth.

” Out there is a gang up against Nigerian airlines. The SAATMs geared towards fleecing Nigeria and nothing more. It is targeted at our market. Some of these countries have nothing to show, when they come to Nigeria, we give them the red carpet treatment and play big brother.

” When you go to their country, they want to run you out of business with charges. They charge taxes or inbound and out bound passengers. They charge exorbitant landing and parking charges, they provide stage-managed ground handling service providers that charge over US$5,000, for what? To run us out of business.

” Even the one we are doing, we are losing massively. People out of ignorance will say Nigerian airlines are making a lot of money on the West Coast, let the, come and fly and see it themselves. Air Peace has lost N1.2billion in the last year doing the West Coast route” Onyema lamented.

Nigerianflightdeck is an online news and magazine platform reporting business stories with a bias for aviation and travel. It is borne out of the intention to inform, educate as well as alter perceptions with balanced reportage.
Previous NCAT to play host to 1,500 guests for maiden Open Day programme
Next AFSCMS unveils N100m secretariat at Lagos Airport