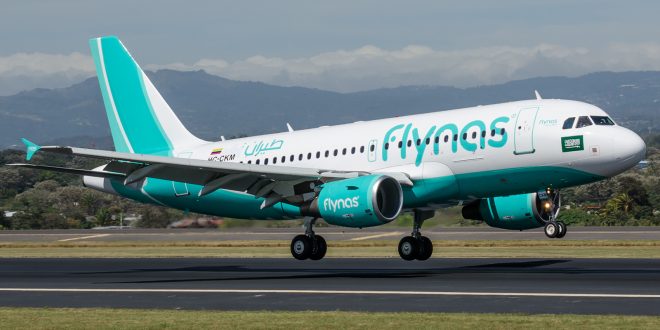 Flynas the Saudi carrier in question

GROUP Captain John Ojikutu has described as fraudulent, the National Hajj Commission (NAHCON’s) declaration that the Saudi Arabian government wants over 100 countries participating in hajj to allocate 50% of their nationals (traffic) to one airline ‘Flynas’ describing the declaration as beyond belief and a way influential Nigerians are circumventing the system to deny genuine operators market share.

This is just as he criticized the rationale behind handing foreign airlines multiple designation stating that Nigeria has no clearly defined policy for growth of its airlines especially given certain exclusivity as it regards to hajj operations.

Ojikutu made his thoughts known in a message to Nigerian Flight Deck reacting to a report credited to NAHCON that 45% of total pilgrims for hajj go to a Saudi airline, describing it as a total rip off and called on government to query the Saudi authorities over this move.

His message read,” Which existing law allows only Saudi airlines to airlift nationals of other countries for hajj, if such a law is not a conjuncture of NAHCON? Unfortunately, the domestic airlines are not seen championing any of the causes or challenging the government on why there had been preferences for foreign airlines on government aviation policies.”

” By the way, how does Adamu Hassan of NAHCON wants anyone to believe his cock and bull story that the Saudi government wants all countries of over 100 participating in the hajj to allocate 50% of their nationals to just one single airline called Flynas? Where has that airline gotten the capacity???”

“These guys just went out to organize a unilateral airline for themselves to make money; another way government officials are denying domestic airlines the markets available in hajj operations”

“Some persons have entrenched themselves in NAHCON even when they are out, they still have influence over government decisions and some of us know them. The way to fight them is to query the Saudi decision to deny our nation the right to fully organize the airlifting of our nationals or find out those behind Flynas Airline; you can be sure they are mainly Nigerians who are not necessarily members of NAHCON but who have moles there.”

On multiple entry points stunting development of domestic airlines, he stated that our domestic airlines will not develop when the exclusive market on domestic and regional routes are open to foreign carriers and called on the airline operators of Nigeria (AON) to champion their own cause for growth.

“ Would the British allow Arik or Medview to fly to Gatwick and Heathrow the way British Airways flies to Lagos and Abuja? Or would the United States allow Nigerian airlines to have multiple designation in the US the way Delta flies to Abuja (before the stopped for economic reasons) and Lagos?”

“ Worse still which African country will allow a Nigerian airline gallivant her country the way Ethiopian Airline is gallivanting in Nigeria to all five international airports? We need to call government’s attention to the lopsidedness or else there will be no capacity for development for domestic airlines.”

On NAHCON, he claimed that the commission just went to organize a unilateral airline for themselves to make money thereby denying domestic airlines the market available for hajj operations.

Nigerianflightdeck is an online news and magazine platform reporting business stories with a bias for aviation and travel. It is borne out of the intention to inform, educate as well as alter perceptions with balanced reportage.
Previous MMA2 at 10: Lessons for private investors
Next ‘NAHCON has no role in 45% airlifting allocation to Saudi airline ‘