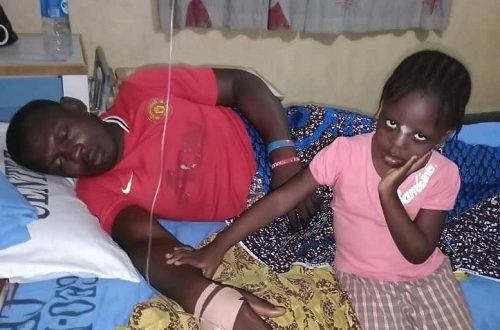 INFORMATION broke out last night that a staff of the NigerianAviation Handling Company (Nahcoaviance), one Tersuu Orhemba was reportedly attacked and stabbed while on duty by a cargo agent simply identified as ‘Bayo’ of Confidence Cargo and the attack has put him in critical condition at the Surgical Emergency Department of  Lagos State University Teaching Hospital (LASUTH).

The incident which transpired on Wednesday 3rd April, 2019, was allegedly captured in full view of a Close Circuit Television (CCTV), nahco staff and customs agents and has been reported to the Nigeria Police and so far nothing has been done as the alleged perpetrator rejected arrest with the aid of other cargo agents at the shed.

Nigerianflightdeck learnt that after the assailant stabbed Orhemba, he collapsed immediately and was rushed to the hospital and despite inviting the police, the assailant caught on camera is walking free while the victim languishes in hospital.

Orhemba’s medical report review shows he has internal bleeding into the brain and will required surgery to clear blood stains in the brain.

Wife of the victim, Mrs. Ter Gyuse, who spoke to our correspondent lamented her ordeal and was apprehensive that nothing had been done to provide justice for her husband.

She told Nigerianflightdeck that after the incident her husband was rushed to a hospital where a brain scan was recommended, after the scan on Thursday the result came out on Friday when the doctor of the hospital, referred her husband to Surgical Emergency Department of LASUTH where they have the facility to save him.

According to her, the surgery may take place anytime but the cost of it is yet to be revealed.

Information coming out of nahco unofficially fingered a major player in the freight forwarding business ( Which NigerianflightDeck has identified as Confidence Cargo).

“The NAHCO staff was assaulted by a cargo agent. He is a staff of one of the so – called big boys in cargo clearing and forwarding. NAHCO security officers reported the matter to the Police. The Police came and wanted to effect arrest. Some cargo agents said they would not allow the police to arrest any of them. The Police went away. NAHCO security department followed up with the DPO who said that the Police had written to the Company of the alleged attacker for the to bring him for interview.”

” Our Security Manager was forced to ask whether that would be the same position of the Police if the victim who is still lying critically ill in the hospital awaiting surgery should die. Would they be sitting down waiting for the company to produce the alleged culprit who was known to the Police and for an act that took place in the presence of Customs officers and other nahco staff who were ready to testify even as the attack was captured on the CCTV?”

Before publication, Nigerianflightdeck called the Police Public Relations Officers (PPRO), Mr. Joseph Alabi numerous times including text messages to ascertain if the police currently has the assailant or any other suspect in custody but did not receive any response.

Nigerianflightdeck is an online news and magazine platform reporting business stories with a bias for aviation and travel. It is borne out of the intention to inform, educate as well as alter perceptions with balanced reportage.
Previous AIB set standards for safety, engages stakeholders, reviews impact of investigations
Next Fire incident affects arrival section of Sam Mbakwe Airport terminal building