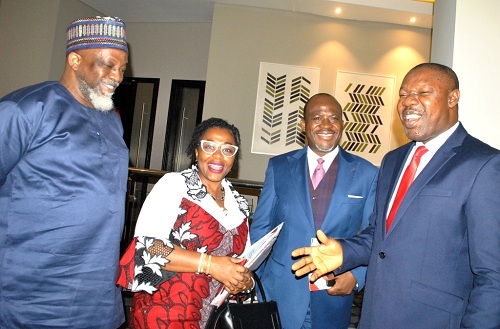 Industry stakeholders met at a two-day event last week to review the role and impact of accident investigation in the aviation industry as well as review the Accident Investigation Bureau’s (AIB) Regulations. The forum opened an avenue for players in the industry to examine the Bureau’s role in their activities. Nigerianflightdeck was there:

FAR and wide, airlines, regulators,ground handlers and service providers came in their numbers for the two-day stakeholders’ forum with the aim of entrenching safety practices through the review of the Accident Investigation Bureau’s Regulations 2016.

The two-day event packed with a lot of discussions bothering around safety had stakeholders from the insurance sub-sector as well as aviation all aiming to review the impact and implications of accident investigation on air travel, cargo, insurance premium and every aspect of the industry.

In his welcome and keynote address, the Chief Executive of the AIB, Engineer Akin Olateru insisted that accident investigation is meant as a tool to improve travel safety and the experience, he said that the AIB in the past few years has sought to boost confidence in air travel with the timely release of accidents/incidents reports.

He also said that beyond the timely release, no fewer than 73 safety recommendations since 2017 and this was made possible by the de-personalisation of accident investigation in the bureau.

Olateru said, “In the past two years, we have focused on improving the Bureau’s investigation processes. This has led to the release of numerous outstanding reports and timely investigation and reporting of all recent occurrences.

“Investigations handled by groups rather than individual investigators. Training of all Air Safety Investigators in accident investigation practices through partnerships with Cranfield University, UK, Southern Californnia Safety Institute and On the Job Training (OJT) with sister agencies such as the US NTSB and Singapore TSIB

Newly established Safety & Security Department as a support mechanism to accident investigation on and off site. Training of first responders, management of safety/security policies and investigation tools (the Go-Kit)

Also to fast track investigations’ data gathering processes, the commissioner stated that investigations will be assisted with the use of drones to assess crash. Sites and identify hazards, also it will be used for aerial photography and mapping and as guide to assess difficult terrain

On day two, in his presentation titled, Aviation Industry Value Chain Analysis- Accident, Incidents & AIB Reports Implications for Propensity to Travel, Managing Director of Spring Fountain, Mr. Tunde Fagbemi said aviation is generally the safest means of travel but when there is a crash its reach is vast and affects the propensity to travel by air.

Fagbemi said that changes in propensity to fly affects the demand for air travel giving the main reasons for it as: the fear of flying and the cost of flying.

Reeling out done statistics of effects of crashes, Fagbemi said,”Effect of Aviation Accident on Propensity to Fly, “ADC Airlines Flight 53 Registration number 5N-BFK crashed in October 2006 had a fatality of 96 persons. Domestic passenger traffic dropped from 5,896,869 in 2006 to 5,665,793 in 2007. A drop of about 4% in one year”

He surmised,”There is usually a drop in passenger traffic after an airplane crash. In cases where the AIB report was quickly released, the passenger traffic shot back up (e.g. The 2013 Associated Airlines Flight 361 crash). The Nigerian Aviation sector has huge potentials. AIB reports are critical in the Aviation Value Chain and for the development of the Aviation Industry especially Consumer confidence which would in turn lead to the desired Increase in passenger Traffic.”

She said the fact that recommendations and safety investigation or accident report involving ground-handling incidents are few is not because they don’t occur as many fall short of the level of damage that clears the reporting threshold for “incidents” and “accidents” befalling operating aircraft.

“However, she said, “ground mishaps do happen, rendering the aircraft unfit to fly.”
and the cost for ground incidents amounts to millions in insurance claims, there is the expense of time lost and repairs.

These events happen during the simple act of towing an aircraft, when the aircraft is parked on ramps, when ramp staff works around an aircraft etc.

She explained that on the ground, aircraft face far more risks from the various other participants within the busy ramp from Fuel trucks, tugs, support vehicles,catering trucks, etc and the ground based risks include collisions between aircraft and ground vehicles which make up 43% of the accidents, moving aircraft equipment such as propellers or nose gear were responsible for 34% of them and finally, 11% resulted from jet blasts or fires.

She said a lot of ramp incidents due to ground handling included personal disruptions, delay of incoming flights and departing flights, return to gate, equipment damage, aircraft damage; passenger and cargo door and a vast majority of others attributing these to the human element of ground based risks.

In conclusion, Mrs. Fagbemi said the aviation industry is a network-based industry that lives from the interaction among the various parts of the system: aircraft, airports, airlines, passengers, ground handling companies, fuelers and more focus should be paid to ground handling incidents by AIB with Safety recommendations that will affect safety changes and improvements in the aviation industry.

According to the NCAA DG, the Terms of Reference amongst which are: to collate all Nigerian Aviation Industry aircraft accident reports from 2000 till date: and determine the status of all reports and recommendations.

He said,”The NCAA was invited to the Committee, where it presented the safety actions with supporting documents and evidences of the actions it had taken to address the safety recommendations made by the Bureau. The Committee in its Final Report stated that it reviewed the status of implementation of a total of One Hundred and Fifty Eight (158) Safety Recommendations, out of which One Hundred (100), representing 63% were fully closed, Nineteen (19), i.e. 14%, partially closed and Thirty Six (36) i.e. (23%), open.”

Nigerianflightdeck is an online news and magazine platform reporting business stories with a bias for aviation and travel. It is borne out of the intention to inform, educate as well as alter perceptions with balanced reportage.
Previous Mainstream Energy loses N1.8 billion annually to stranded Power
Next updated: Outcry as Police powerless to apprehend cargo agent assailant of Nahco staff despite CCTV evidence