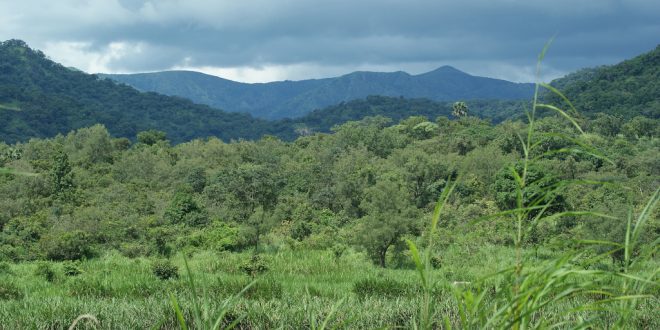 Now for those of you who love landscape scenery and who must have, on countless occasions, seen J. R. R Tolkien’s ‘The Lord of the Rings’ and ‘Hobbit’, I am sure you would be quite interested in some of the scenery that can be found in Nigeria and one of such a scenery is the Gashaka National Gumti Park. Relax and let us explore the park together so as to give you a peak of what you will get when you eventually go there to have fun.
Gashaka National Gumti Park is an embodiment of ‘nature’s gift to the nation’ with its natural and beautiful habitat, rivers, forests and various species of fauna and fish, a tourist’s haven for naturalists.
Location and topography:
Located in the remote mountainous region of Taraba, north-eastern Nigeria, between the boundaries of Adamawa and Taraba States, the Park is situated in the sub-Sahara Guinea Savannah Zone of Africa, in the sub-tropical zone of the south-east’s highlands of the Savannah area of Nigeria, south of the Benue River.
The park covers 6,731 sq km wilderness, it derives its name from two of the region’s oldest and most historic settlements: Gashaka village in Taraba State, and Gumti village in Adamawa State.

It also shares international boundary with the Republic of Cameroon, adjacent to Earn National Park in that country. Immediately to the south of the park is the Mambilla Plateau. It is administratively divided into Gumti Sector is the north (Adamawa State) and Gashaka Sector in. the South (Taraba State).

Gashaka Gumti National park is the home of highest mountain chappal waddii which is also known as “Mountain of Death” located southern sector of the park locally called Gangirwal which requires eight to ten days trek to appreciate it. The park also has Chappal Hendu the “Mountain of wind”; it also has rivers that flow through it including River Taraba, River Benue and River Kam which makes the park an excellent place for fishing.
Gashaka-Gumti is the largest among the seven National Parks in Nigeria. It is described as one of Africa’s beat kept “conservation secrets”.
Fauna attraction:

It also has over 500 species of bird, 50 different fish species, and activities such as primate watching, mountaineering, bird – watching, holidaying and ecological researches can take place and coupled with its beautiful sceneries, subtropical climatic conditions, flora and fauna diversity. This area is best explored on foot with

accompanied guide.
Gashska-Gumti’s biggest attraction is the unique opportunity to observe chimpanzee undisturbed in their natural habitat; Kwano forest, Liangs Mountain, Gunsti area and Chappel Wade are some of the possible sites. The inaccessible, thickly forested mountains of this vest protected area provide sanctuary to large numbers of chimpanzees’ which forms one of the few remaining chimpanzee strongholds anywhere else.
Tourists are invited to explore the commanding view of a continuum of mountains/hill the stretch from Gumti to Adaguro settlements, interacting with various bureaus in their traditional cultural settings. Remains of ancient village fortifications, ditches and balustrades are still conspicuous in Gumti.
Time to visit:
The convenient time to visit the park is during December to April because of weather condition then. From late July to November accessibility to park is quite difficult because the rivers, streams overgrown vegetation and marshy areas has flooded. The greater part of the park is inaccessible to vehicles due to undulating, difficult and rugged terrain as well as thick vegetation and crisscrossing rivers and streams.

During the period to visit, visitors may be able to see a lot of wildlife species,  different vegetation-types and pursue a combination of ecotourism, recreational activities, research and education field trips During the season, accessibility has been made eastern through maintenance of tracks and trails, and improves visibility by regulated bush burning.
From late July to November, accessibility is however, very difficult as flooded rivers, streams, overgrown vegetation and anarchy areas hays cut oft assess so many places of recreational interests.
Gashaka-Gumti can also be described as a miniature Garden of paradise reclaimed from, destruction bring protected, and conserved for posterity. Its proximity to, the Mambilla Plateau end its advantageous location to the adjoining Euro National Park in Cameroon has a – the potential of drawing considerable member of international visitors in the near future for various ecotourism related.

For visitors crimping from the South, main access to Gashaka Sector is from Wadsari Mutuna-niyu – Bali- Scat and into the Park through Rodel or, Katsina-Ala Tekum – Bali – Serti to the Park through. Another route is from either Numan-Jalingo-or Yola-Meyo Belwa. Jalingo to Serti- model and listen to the Park. While main access to Gumti Sector is from lois Mayo Belwa Jada Ganye. Toungo into the park. ‘The nearest airport to the park is at Yola, Adamawa State. There is aura an airstrip at Serti and Jalingo although the facilities are-yet to be completed for operation.
For monitoring, the latest technological devise such as CCTV cameras and cyber tracker, park managers find it easy to track activities of violators and also monitor changes in ecology right inside their offices.

Nigerianflightdeck is an online news and magazine platform reporting business stories with a bias for aviation and travel. It is borne out of the intention to inform, educate as well as alter perceptions with balanced reportage.
Previous Customs arrests Chinese for attempted smuggling of 678 elephant tusks, pangolin
Next Resignations loom as FG restructures FAAN; demotes, redeploys personnel