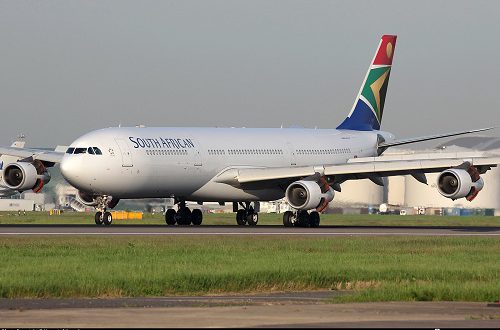 SOUTH Government has appointed Mr. Nick Fadugba as one of six others into the interim board of South African Airways with an aim to reposition the airline.

The appointment was done through the Department of Public Enterprises (DPE).

The board will see to the restructuring of the airline for profitability and professionalism and to restore proper governance and oversight of the airline during the implementation of a business rescue plan.

A statement by the DPE read,“As a shareholder on behalf of government, the DPE is delighted that these experienced professionals have agreed to join the board of SAA. Their combination of academic, financial, legal and aviation experience, with deep knowledge of global aviation and transportation trends, will bring a new perspective as the national carrier prepares to relaunch next year.”

The appointments, it said also enhances the independence and balance of the board, whilst continuing the process of transformation and renewal.

“Nick Fadugba, is an aviation professional with many years in consulting and promoting aviation development on the African continent, including leading the African Airlines Association (AfRAA). He has served as the Chairperson of African Business Aviation Association and has been involved in discussions on a Single African Air Transport Market (SAATM),”said DPE.

Fadugba established African Aviation Services (AAS) in 1990 with the pan-African vision of promoting aviation development throughout Africa. He believed that aviation could be a vital catalyst for Africa’s economic and social transformation. Since 1988, he has provided a wide range of consultancy and advisory services to international aviation, finance and leasing organisations and to African Governments. He has also been instrumental in fostering business relations between Africa and the international aviation community in critical areas such as Aviation Finance, Aircraft Leasing, Aircraft Maintenance, Air Safety and Aviation Training.

Fadugba has unique experience in aviation finance and aircraft leasing negotiation, arbitration and dispute resolution. Other areas of speciality include developing airline business plans; fleet planning; aircraft leasing and finance advisory services; airline route network development; market information research and analysis; reconciliation of aircraft leasing / finance accounts and debt recovery; negotiating acquisition of airport slots and air traffic rights; and establishing London Heathrow Airport operations for foreign airlines. He was elected Chairman of the African Business Aviation Association (AfBAA) in May, 2018. He is a former elected Secretary General of the African Airlines Association (AFRAA); is a Launch Member of the African Business Aviation Association (AfBAA) and Vice Chairman of its Safety and Training Committee; is Chief Advisor to the Association of African Aviation Training Organisations (AATO); is a Fellow of the Royal Aeronautical Society (RAes), UK; a member of the Aviation Club of the UK; a member of the German Aviation Research Society (GARS); the European Aviation Club; the Institute of Directors (IOD), UK; the International Society of Transport Aircraft Trading (ISTAT), USA; a Volunteer for Airlink, the international aviation charity, and a member of the ISTAT Scholarship Program for African Students.

As Chairman of AfBAA, Fadugba, currently represents Africa on the Governing Board of the International Business Aviation Council (IBAC), Montreal, Canada, an affiliate of ICAO.

Qhena is a qualified Chartered Account and a seasoned finance executive. He is a former Chief Executive Officer of the Industrial Development Corporation, where he was at the helm for 13 years.

Tshisevhe is a mergers and acquisitions lawyer with extensive experience in transaction advisory services. He is a director and partner at TGR Attorneys, a leading commercial law firm in Johannesburg.

He is also a part-time lecturer at Wits University Law School. He has been retained from the previous board to provide continuity.

Crawford, who leads the Aviation Working Group of the South African Business Council, is a leading aviation and tourism leader and professional. She has been the Chief Executive Officer of the Board of Airlines Representatives of South Africa, director at the Air Traffic and Navigation Services and Deputy Chairperson of the Tourism Council of South Africa.

Meanwhile, Zwane is an aviation entrepreneur who is a part-owner in an aviation training solutions provider, a car rental business and an aviation logistics business. She is a former executive at Imperial Logistics and Equity Aviation.

Professor Van Harte is an academic and former dean of the faculty of Military Science at the South African National Defence Force’s military academy at Saldanha Bay and former Chairperson of the Defence Service Commission. She has served on various boards and commissions.

In charting the way forward, the DPE said it believes that the key to solving the difficulties facing SAA is the finalisation and implementation of the business rescue process, followed by the start of a restructured airline; appointment of a leadership team; and securing a credible strategic equity partner who can introduce the required technical, financial, and operational expertise into the business.

“The new airline will be run in a professional and sustainable manner to support key economic sectors – including tourism, trade with the continent, the local aeronautics industries and local service providers,” said the department.

Nigerianflightdeck is an online news and magazine platform reporting business stories with a bias for aviation and travel. It is borne out of the intention to inform, educate as well as alter perceptions with balanced reportage.
Previous Heritage Bank to pump ₦5bn into creative Industry; gives winner of Ynspyre online competition N1m
Next NIS MMA Command denies 60 Nigerians departure for various compliance issues