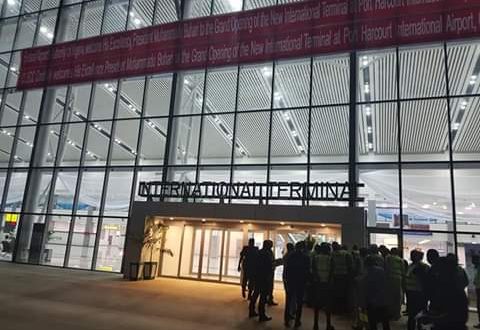 Outside view of the Port Harcourt International Airport terminal

FOLLOWING bush fire that occurred near the active area of the of the Port Harcourt Airport, Omagwa, the Federal Airports Authority of Nigeria (FAAN) shutdown and has consequently reopened the airport after evaluating the situation.

This is just as the Nigerian Accident Investigation Bureau (AIB) announced that it has commenced investigation into the serious incident involving Turkish Airways A330-300 aircraft with registration marks TC-LOL.

Yesterday evening flight activities in and out of Port Harcourt were temporarily halted after a fire outbreak which occurred in the bushes near the runway of Port Harcourt international Airport, Omagwa, Rivers state.

It was gathered that the fire prevented a Max Air flight from taking off why an Arik flight had to return to base.

A Dana flight from Abuja to Port Harcourt also reportedly had to return back to the Nnamdi Azikiwe International Airport, as it could not land due to the fire.

FAAN in a statement closing the runway said, “The Federal Airports Authority of Nigeria wishes to inform airlines, passengers and the general public that a bush fire incident has occurred near the active area of the Port Harcourt International Airport, Omagwa.

“Consequently, the Authority has temporarily closed the runway of the airport to operations as part of safety precautions.

“A joint team from the Federal Airports Authority of Nigeria and the Nigeria Airspace Management Agency is presently evaluating the situation with a view to ensuring that the airside is cleared of smoke and restoration of normalcy at the airport.

Today, normal flight activities have re-commenced at the airport according to FAAN which stated that,”

Following a careful evaluation and mitigation of the impact of the bush fire earlier reported around the Port Harcourt International Airport and the dissipation of smokes around the airside, the Federal Airports Authority of Nigeria wishes to inform the general public that the airport has now been re-opened to operations.”

Meanwhile, the AIB in a statement said was notified that at about 3:30am local time, on the 31st December, 2019 the aircraft was enroute Port Harcourt from Istanbul, Turkey with 295 passengers and 11 crew members on board suffered a burst tyre on landing on runway 21, Port Harcourt International airport.

“The Accident Investigation Bureau, Nigeria has commenced investigation into a serious incident involving an A330-300 aircraft operated by Turkish Airline, with registration marks TC-LOL.

“The aircraft suffered a burst tyre on landing on runway 21, Port Harcourt International airport, veered off the runway and managed to taxi to the new international terminal. All the occupants disembarked with no injury.

“The Bureau is open to receiving any video clip, relevant evidence or information that may assist in this investigation.

Nigerianflightdeck is an online news and magazine platform reporting business stories with a bias for aviation and travel. It is borne out of the intention to inform, educate as well as alter perceptions with balanced reportage.
Previous Minister enters 2020 with commitment to Enugu Airport Runway repairs
Next TEF opens African entrepreneurs’ application portal for 2020 cohort