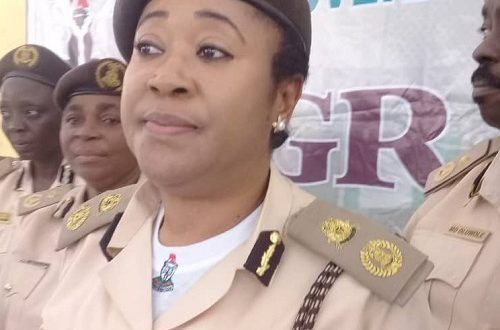 NIS to build foreigners’ data base, flags off Migrants E-Registration initiative in Ogun next week

PLANS have been put in place by the Ogun state Command of the Nigerian Immigration Service (NIS) for the flag off the Migrants E registration initiative with a sensitization campaign of Economic Community of West African States (ECOWAS) national’s resident in the state.

This is just as Federal Government has given all foreigners a grace of 6 months to be registered or under the Migrants E registration scheme.

The Migrants E registration is a new initiative by the administration of President Muhammadu Buhari to have a data base of non-Nigerians residing in the country.

Ogun State Comptroller of the NIS, Mrs. Doris Braimah who kick started sensitization of the initiative in Abeokuta said it is aimed at gathering, collating, and capturing data of non-nationals residing in the country and keeping track of them for security purposes.

Mrs. Braimah while addressing the ECOWAS nationals this morning charged them all to come out enmasse and register so that they can be fully captured in the data base

She stressed that the Migrants E-registration is important for Nigeria as a country and the non-nationals as well as it will assist security of the country to know those who are not part of Nigeria.

On how the initiative was birthed Mrs. Braimah said Federal Government had decided it was important for that the Nigeria Immigration Service registered every foreigner in the country and the Comptroller General set up a committee about two years ago to come up with a mode on the workability.

“A committee was set up about two years ago to come up with a format of how this was to be done, this is what we are witnessing here today. The Comptroller General directed that all the states should sensitize every non-Nigerian in their states which we are doing, sometime next week the Executive Governor of Ogun State, Prince Dapo Abiodun Will do the maiden flag off.

She went on to state that,“Registration used to be done manually but the president directed it should be done electronically so we have called this stakeholder forum for you to sensitize you and let you inform others.

“Our intention for this is to have a comprehensive data base for every foreigner in the country.

“They need to come forward and register, it is free. They don’t need to pay anything, all they need is just to apply, fill up their forms then come to any of the Immigration Headquarters. Right now we are in Ogun State and so they can come to Abeokuta where immigration headquarters is, it is applicable to every other state command. There is nothing attached to it, the reason is to encourage them. Mr. President is very interested in this and so is the Comptroller General of Immigration, Muhammad Babandede,” she surmised.

Nigerianflightdeck is an online news and magazine platform reporting business stories with a bias for aviation and travel. It is borne out of the intention to inform, educate as well as alter perceptions with balanced reportage.
Previous FAAN moves to de-congest MMIA starting with car hire operators
Next Nigeria Airline: When will we ever learn?