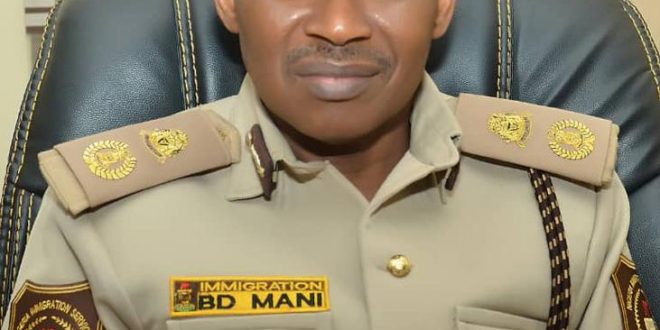 The Lagos State Command of the  Nigeria Immigration Service (NIS) on Wednesday 5th day of October intercepted three minors that were suspected to be victims of “Child Trafficking”.

Whilst their applications were duly completed online using the Service Window supplying the necessary breeder documents for passport applications for minors, our vigilant team of vetting/enrollment officers in the Alausa Passport Control Office noticed that the three minors were unaccompanied by any of their parents and that the consent letter attached to their application was signed by a man with the name Calvin James with a Lagos home address who claimed to be their father but with a Canadian International Passport.

The discovery led to further questioning of the minors to ascertain the veracity of the claims in the documents supplied in support of their applications.

The accompanying adult who was questioned disclosed that he was just a driver contracted to convey the suspected victims to the Passport Office and that he has no familial or legal guardianship ties to the minors as required by the law.

The driver further revealed that the person who is competent to answer all the questions is in a waiting car outside the Passport Office premises.

This led to the Service inviting the person in question who happens to be a female manager of  the orphanage that caters to the welfare of the minors.

The revelation that the children have been residing in an orphanage for the past two years and thereabout further complicated the whole story and raised more grounds for suspicion.

According to Comptroller Lagos State Command, Mani D Bagiwa who briefed of the situation, during the process discrepancies were noticed between the verbal account given by the minors and the breeder documents supplied in support of their applications.

The NIS Comptroller also stated  that one Mrs. James who claimed to be the biological sister of their mother revealed that for a period after the demise of their mother, the minors were with one Chinasa Faith on her instruction.

Investigation also revealed that Mrs. James relocated the minors from Delta state to Lagos with Chinasa as their guardian, however after a period of time, people in the neighborhood discovered that the children were being abused and thus reported the same to the Lagos State Ministry of Youth and Social Development.

The Ministry’s intervention, according to the state Comptroller led to the relocation of the children to the orphanage home where they were still residing before this incident.

It was also revealed that Mrs. James came to Nigeria sometime this year to intimate the Ministry of her intention to continue the adoption process that could have conferred legal custody/guardianship which she  initiated since 2017 in Delta State which was not concluded.

However, it was learnt that  the breeder documents such as NIN and birth certificates that were supplied in support of the application could only have been procured with fraudulent documents.

Comptroller Bagiwa said the Comptroller General of Immigration, Isah Idris Jere has directed that the three minors and the two suspects be handed over to the National Agency for Prohibition of Trafficking-InPersons (NAPTIP)

Nigerianflightdeck is an online news and magazine platform reporting business stories with a bias for aviation and travel. It is borne out of the intention to inform, educate as well as alter perceptions with balanced reportage.
Previous Leadstream Aviation Training bags ISO 9001:2015 standards for quality trainings
Next ‘Japa syndrome’: Liberian Immigration rescues 11 Nigerian stowaways allegedly tortured onboard ‘Ophelia Panama’