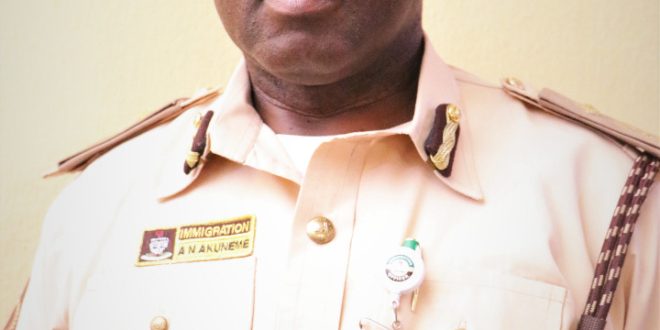 A statement e-signed by Kenneth Kure, a Chief Superintendent of Immigration (CSI)  on behalf  of NIS stated that the Comptroller General of Immigration, Isah Jere Idris, made the appointment after  the retirement of the immediate past spokesman of the Service, Amos Okpu, a Deputy Comptroller of Immigration (DCI), after 35 years of meritorious service at NIS.

“Comptroller General of Nigeria Immigration Service, Isah Jere Idris MFR, has approved the appointment of Tony Akuneme, a Deputy Comptroller of Immigration (DCI), as the new Service Public Relations Officer (SPRO). He replaces DCI Amos Okpu who has since proceeded on retirement after 35 years meritorious service to the nation,” the statement said.

He has attended various courses within and outside the country, including the Superintendent Basic Course at the Immigration Training School, Kano.

Akuneme who is bringing to the NIS Public Relations Department, 29 years of broad and extensive experience in border security and migration management has during his career served in various capacities.

With a well-established track record of achievements in Public Relations, he was in 2015, seconded to the office of the Minister of State for Education as Special Assistant on Media, a position he held till 2019.

He had previously served in various formations of the service home and abroad. He was Deputy Zonal Publuc Relations Officer (PRO) Zone A, Lagos from 1995 to 2005; PRO, Akwa Ibom State Command, from 2005 to 2008, Deputy Service PRO from 2008 to 2011 and Immigration Attache, Nigeria High Commission Canada, from 2011 to 2014.

Until his recent appointment, the newly appointed Service spokesman was the Head of Immigration Desk, Nigeria Diaspora Commission.

Akuneme has since assumed duty as the Public Relations officer of the Nigeria Immigration Service.

Nigerianflightdeck is an online news and magazine platform reporting business stories with a bias for aviation and travel. It is borne out of the intention to inform, educate as well as alter perceptions with balanced reportage.
Previous NiMet, IRC pen MOU to develop community-based early warning system
Next Arik Air launches 15% discount Black Friday Ticket Promotion