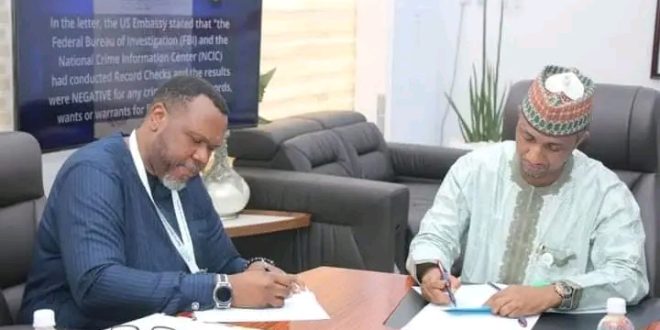 The Nigerian Meteorological Agency (NiMet) and the International Rescue Committee (IRC) has disclosed its plan to establish a community based flood early warning system in a bid to enhance the mitigation of climate change challenges as well as promote the coordination and partnership with grassroot stakeholders.

This was made known by the Director-General/CEO of NiMet Prof. Mansur Bako Matazu during the signing of Memorandum of Understanding (MoU) on advisory data sharing information, between NiMet and the IRC at the NiMet Headquarters, Abuja.

The DG/CEO NiMet explained that one factor that aids in the mitigation of climate change disaster is early warning, adding that, the United Nation in recognition of this fact, has issued a policy statement, that in the next five years, all citizens should have access to early warning.

NiMet, he said, has long keyed into this initiative via its early warning publications and other products.

Mr. Ojei, explained that the partnership of NiMet and IRC would further strengthen and develop links with local organizations, increase the adaptation of NiMet data, as well as provide farmers with the resources to effectively utilize the data derived.

He revealed that IRC is a non governmental organization committed to providing services to enhance survival and rebuild lives of people affected by conflict and disasters including those imposed by climate change.

Nigerianflightdeck is an online news and magazine platform reporting business stories with a bias for aviation and travel. It is borne out of the intention to inform, educate as well as alter perceptions with balanced reportage.
Previous MamaJ Aviation Consult holds 6th annual career conference
Next Nigeria Immigration appoints new Service Public Relations Officers