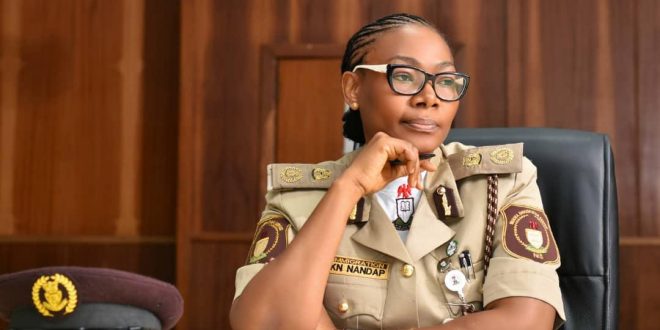 CIS Nandap replaced CIS Abdullahi Dalhatu, the immediate past Comptroller of the command who retired from service earlier in the year.

A statement by the Public Relations Officer (PRO), MMA Command SI Louisa Amadiokoro, stated that until her appointment, CIS Nandap served as Comptroller in charge of Plateau State Command where she left indelible marks of infrastructural and human capital development.

According to the statement, the new Comptroller served as the Assistant Comptroller General (ACG) in charge of zone C.

CIS Nandap was born on June 3, 1966 in Zaria Kaduna state and had her undergraduate studies in the University of Ilorin where she bagged a Bachelor of Science in Biochemistry.

The statement added that Nandap had served in many commands and in different capacities including Officer-In-Charge (O/C) Investigation and Compliance, O/C Economic Community of West African States (ECOWAS) and African Affairs, Second in Command Nassarawa State command.

SI Amadiokoro stated that CIS Nandap is coming with wealth of experience to further position the MMIA Command as the leading command in the country, adding that the new Comptroller had promised to entrench professionalism in the system.

She said: “The comptroller is a seasoned administrator who will bring her wealth of experience to play by ensuring that the MMA Command continue to play the leading role in the country. As the first port of contact to travellers especially to foreigners coming into the country, it is necessary to have a professional and an administrator in charge of such a command. This, our new comptroller possess.”

Nigerianflightdeck is an online news and magazine platform reporting business stories with a bias for aviation and travel. It is borne out of the intention to inform, educate as well as alter perceptions with balanced reportage.
Previous Dana Air reintroduces early flights from Abuja Feb 1, as Captain Shokunbi retires
Next NCAA fingers insiders on Arik aircraft component theft, explains unserviceable aircraft implications