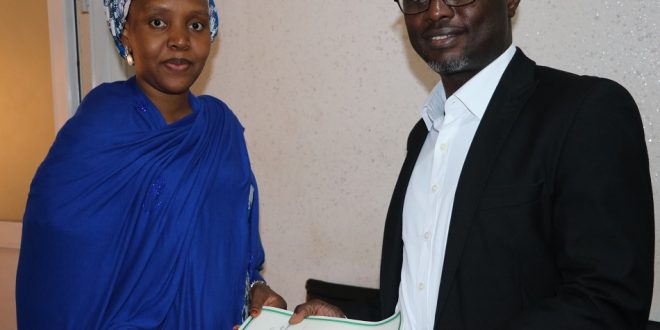 Photo caption: R-L:Med-View’s Executive Director, Business Development and Commercials, Mr. Isiaq Na’Allah and Fatima Bukar, a Senior Legal Officer to NEMA during the signing of the agreement at NEMA's headquarters in Abuja.

FEDERAL Government of Nigeria through the National Emergency Management Agency, (NEMA) has signed an agreement with Med-View Airline to participate in the evacuation of 5,037 Nigerians facing social challenges of various degrees in Libya.

The agreement signed at NEMA headquarters in Abuja yesterday December 29, 2017 will facilitate smooth airlifting of Nigerians out of the troubled zone. Med-View will be participating in the airlifting of 5,037 evacuees with another Nigerian carrier.

“This kind of responsibility is meant for Nigerian carriers, because it our responsibility and we have the capacity to carry out this operation. We have demonstrated the capacity that we can do it and we are honoured to have been appointed by the Federal Government through NEMA”, said Med-View’s Executive Director, Business Development and Commercial, Mr. Isiaq Na’Allah who participated in the signing of the agreement.

“It is a known fact that Med-View Airline has been in operations for the past 10 years. We do Hajj operations and we do it successfully and the record is there for everybody to see, that is a factor I think the government considered before we are assigned this national project. We will deliver professionally up to international standard and the government is not making any mistake for entrusting Nigerian carrier to this kind of project.”

Recently, the President of the Federal Republic of Nigeria, Muhammadu Buhari constituted a 17-man fact-finding committee to aid the evacuation process of 5,037 Nigerians. The 17-man team is headed by Minister of Foreign Affairs Geoffrey Onyeama.

The Federal government has also established a Reception Centre in Port Harcourt, the Rivers State capital, to be managed by the Zonal Coordinator of NEMA, to receive the 5, 037 returnees.

The Federal Government is also to work with the governors of the returnees’ states as the returnees, after profiling, identification and documentation, will be handed over to their state governors.

Nigerianflightdeck is an online news and magazine platform reporting business stories with a bias for aviation and travel. It is borne out of the intention to inform, educate as well as alter perceptions with balanced reportage.
Previous Med-view normalizes operations, airlifts Dubai passengers
Next Air Peace hints at massive expansion in 2018, thanks customers, staff