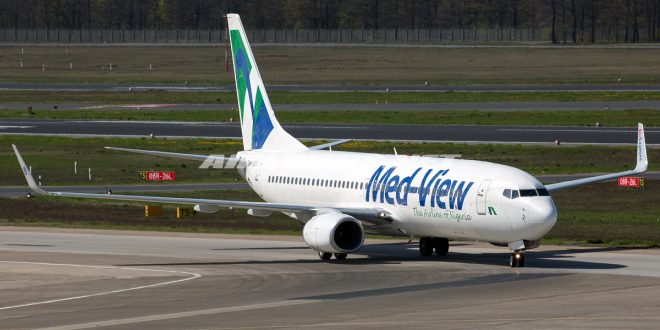 FLIGHT operations of Med-view Airlines seem to be normalizing rising from a series of unfortunate fracas with passengers due to rescheduling flights after the airline’s aircraft out of London- Gatwick hit a snag and was grounded.
The airline last night checked in its Dubai passengers who were allowed access through immigration and screening to the Airbus with 326 passenger capacity.
According to information reaching nigerianflightdeck.com, flights to Gatwick-London today will also depart later in the evening as flight time will be communicated to the passengers.
The airline had promised yesterday that Its normal flights resume on Friday for London, Dubai and Jeddah.

it was learnt that the Med-view station manager confirmed that the Gatwick flight would leave in the evening of 29th December, 2017 and that departure time would be communicated to the passengers by 16:00hours today Friday.

In a statement signed by Chief Operating Officer/Accountable Manager, Mr. Michael Ajigbotosho the airline apologised and sought the understanding of its esteemed passengers.
“We use this medium to appeal to our Nigerian customers. As much as we appreciate their patronage and apologize for the experience they went through this Christmas, we seek for their understanding to know that their safety comes first before any other thing,”the statement read.

Med-view yesterday explained that its flight VL 2101 out of London to Lagos on Friday December, 22 returned to Gatwick after departure as a precautionary measure taken by the Pilot- in – Command (PiC) in line with Aviation Standard and Recommended Practices.

This, the airline said, led to cancellation of the flight as the aircraft was declared AOG (Aircraft On Ground).

After the aircraft was declared AOG, the airline said it had to wait for a maintenance report. The aircraft had to remain on ground until a certified expert carried out the necessary checks and certify that the aircraft is airworthy.

Nigerianflightdeck is an online news and magazine platform reporting business stories with a bias for aviation and travel. It is borne out of the intention to inform, educate as well as alter perceptions with balanced reportage.
Previous Med-view explains delayed flights out of Gatwick, appeals to passengers
Next NEMA, Med-view sign agreement to evacuate 5, 037 Nigerians from Libya