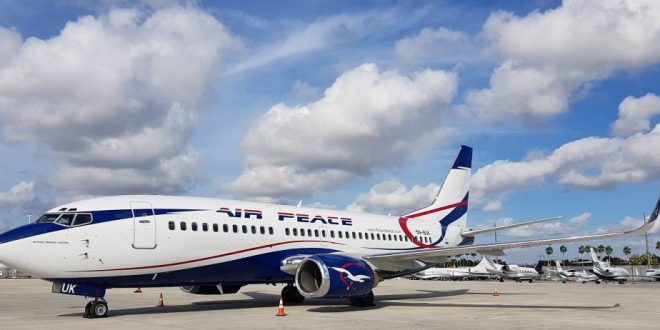 Air Peace hints at massive expansion in 2018, thanks customers, staff

COME 2018, Air Peace has revealed plans to expand strategically in Africa as well as Europe and the Far East and is deepening air connectivity on many routes in the North of Nigeria.

The airline plans to expand to domestic routes like Kano and Yola and assured that it would soon announce a new date for the launch of the three suspended Freetown, Banjul and Dakar in the West Coast.

Chairman/Chief Executive Officer of Air Peace, Mr. Allen Onyema made this known at the airline’s end-of-year management session held on December 27 in Lagos to review the airline’s flight operations in 2017 where he added that the airline will soon start operations to Dubai, Guangzhou, London, Houston, Mumbai and Johannesburg.

Onyema who commented on the carrier’s operations in 2017 insisted that the airline deserved commendations for rescuing the Nigerian aviation industry and giving air travellers hope in the period under review.

He said he was quite satisfied that Air Peace was able to expand its fleet to 24 aircraft despite the economic downturn the country and its aviation sector experienced in 2017.

He attributed the airline’s success in the three years of its existence to the unflinching support of the flying public and the quality leadership of its management team.

The Air Peace boss said the airline would remain grateful to its customers for their patronage over the years, urging the flying public to continue to trust the carrier’s services.
Air Peace, he assured, would continue to strive to sustain its uncompromising approach to safety, prioritization of the comfort of its customers and job creation.
The airline, Onyema however said, still had a lot of grounds to cover in its vision to transform air travel experience in Nigeria, the West Coast of Africa and the Dubai, Guangzhou-China, London, Houston, Mumbai and Johannesburg routes.
He charged the carrier’s management to brace up for the challenge of implementing the airline’s plan to deepen air connectivity on many routes in the North of Nigeria, including Kano and Yola, and other domestic routes.
He regretted that industrial unrest by Air Traffic Control in Senegal compelled Air Peace to suspend the launch of its Freetown, Banjul and Dakar routes planned for December 15, 2017.
Onyema, however, assured that the carrier would soon announce a new date for the launch of the three suspended West Coast routes.
He said the airline, which commenced flight operations to Accra-Ghana on February 16, 2017, was determined to expand to about nine destinations on the West Coast of Africa.
The airline, he added, was awaiting the delivery of the two Boeing 777 it recently acquired to start its flight operations to Dubai, Guangzhou, London, Houston, Mumbai and Johannesburg.

Nigerianflightdeck is an online news and magazine platform reporting business stories with a bias for aviation and travel. It is borne out of the intention to inform, educate as well as alter perceptions with balanced reportage.
Previous NEMA, Med-view sign agreement to evacuate 5, 037 Nigerians from Libya
Next Aviation: Major events of 2017 that may help shape 2018