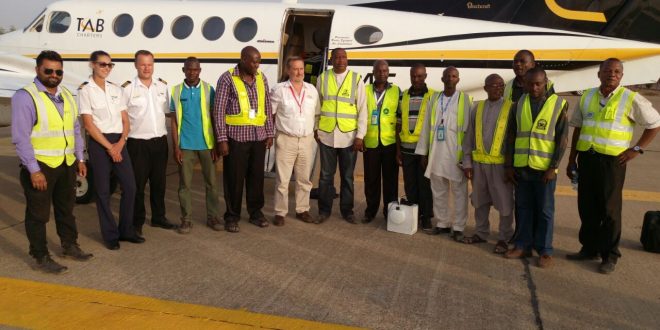 This is ahead of the March 8 closure of the Nnamdi Azikiwe International Airport, Abuja and in a bid to ensure accuracy, reliability and efficiency of facilities at the Kaduna airport.

The flight calibration was handled by Omni-Blue Aviation Ltd along with their technical partners (FCSL of United Kingdom) in collaboration with NAMA engineers who carried out the installation, alignment and parameter adjustment during the exercise.

According to the Calibration Manager, Engr. Akeem Ogunmola, the flight exercise which started from Kaduna will extend to Kano, Katsina, Sokoto and Bauchi. In Bauchi Ogunmola said the calibration team would be commissioning three systems which include ILS/DME, VOR/DME and Non-directional beacon.

Also to be calibrated are facilities in the Port Harcourt and Lagos international airports.

Commenting at the end of the calibration exercise,  the Director of Safety Electronics and Engineering Services, Engr. Farouk Umar who led the NAMA team of engineers in the installation of the facilities in Kaduna described the calibration exercise  as very successful, saying that “Kaduna airport is on full components of navigational aids, functioning at optimal levels. We can gladly report that Kaduna airport can now safely land aircraft even in critical weather conditions as far as Navaids are concerned.”

Nigerianflightdeck is an online news and magazine platform reporting business stories with a bias for aviation and travel. It is borne out of the intention to inform, educate as well as alter perceptions with balanced reportage.
Previous South African officials deport 97 Nigerians
Next Emirates to unveil enhanced A380 Onboard Lounge at ITB Berlin