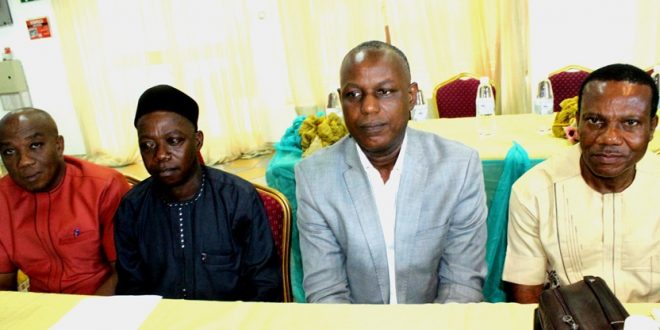 LAGOS State chapter of the National Association of Air Traffic Engineers (NAAE) has re-elected Anthony Nwose of the Air Traffic Safety Electronics Personnel (ATSEP) as the Chairman and other executives at its Biennial General Meeting held alongside its annual symposium.

The event which held on the 28th March, 2019 at the Welcome Centre Hotels, Lagos with the theme: “Cyber Threat In Aviation Industry: The Role of ATSEPS” also saw KIlasho Ibrahim as Vice Chairman as well as Sonowo Ayodele as Secretary; Olawepo Andrew as Treasurer; Ahmed Mobolaji as Financial Secretary and Christiana Adegbaju as Public Relations Officer, all of ATSEP.

In his welcome address before the elections, Nwose welcomed all participants at the occasion, commending the organising committee for putting up such an effort to ensure that the event was successful.

Stating that NAAE experience is a journey that started many years ago with lots of input from its members to ensure that the association succeeds, Nwose expressed satisfaction with the level of achievements the body has achieved over the years.

“The journey started many years ago. I remember there were times when it was difficult for us to work because of lack of tools. We now have tools to work because NAAE. Many of our own has been trained and retrained in various areas. This is part of the efforts that NAAE has put ensure that the management lives up to its expectations”, Nwose said.

“The National Association of Air Traffic Engineers (NAAE) is an affiliate of the International Federations of Air Traffic Safety Electronics Associations (IFATSEA) whose members have the responsibility of provision, installation, maintenance and calibration of Communications, Navigational aids, Surveillance (CNS) and Power Systems. They hitherto play a pivotal role in the aviation safety chain”, Nwosu reiterated.

Nwose further, stated that the theme was selected in view of increasing threats posed on the cyber world of which the aviation industry is part and parcel of.

“We believe that the event will be highly educative given the caliber of the Guest Speaker who have been carefully chosen to give more impetus to all important assignment of this group of aviation professionals”, Nwose added.

In his presentation, Guest Speaker, Engr. Ifeanyi Ogochukwu who spoke on the topic: “Cyber Security and Cyber Threat in Aviation Industry, and The Role of ATSEPS” revealed to participants, the dangers of cybercrime and possible ways to avoid their onslaught of cyber criminals.

Engr. Ogochukwu who is also the Chief Technology Strategist, Debbie Mishael, while taking the participants through cybercrime as it affect the aviation industry, pointed out that it is very important that everybody knows that “We are under attack” by cyber criminals.

He proffered possible ways individuals or corporate organizations should adopt to beat the criminals to their game, stressing that at any point in time, they are monitoring one prey or the other.

The event was divided into three segments which comprises of the workshop or symposium; Biennial General Meeting and election of officers of the chapter.

Nigerianflightdeck is an online news and magazine platform reporting business stories with a bias for aviation and travel. It is borne out of the intention to inform, educate as well as alter perceptions with balanced reportage.
Previous NCAA instructs ATCs to close airspace; cautions pilots, airlines over thunderstorm
Next Cape Verde mulls establishing Embassy In Abuja; concludes talk on air transport relationship