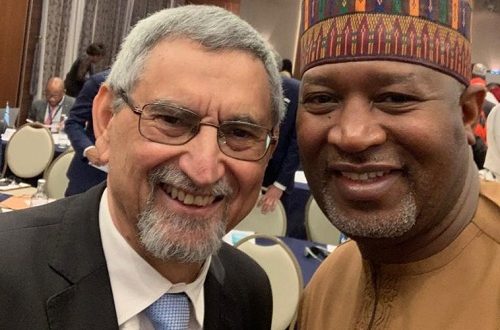 Minister of State for Aviation, Sen. Hadi Sirika and the President of Cape Verde, Mr. Jorge Carlos de Almeida Fonseca at the First ICAO/UNWTO Ministerial Conference on Tourism and Air Transport in Africa, held in Sal, Cape Verde at the weekend

FEDERAL Government of Nigeria has said Cape Verde is planning to establish its embassy in the Federal Capital Territory, Abuja.
This is just as FG has hinted on the discussion with Cape Verde on the plan to begin air transport relationship in line with existing Bilateral Air Service Agreement between the two countries.

Minister of State for Aviation, Sen. Hadi Sirika made the disclosure after a meeting with Cape Verde representatives during a sideline meeting at the just concluded the First ICAO/UNWTO Ministerial Conference on Tourism and Air Transport in Africa, held in Sal, Cape Verde.

Sirika said: “We have just concluded a meeting with Cape Verde authority and they have signified interest to start flight operations into Nigeria. Cape Verde is willing to exercise their right in the Bilateral Air Service Agreement and hopefully to seek a Nigeria airline that will reciprocate through flight operation into Cape Verde.”

“They will start operations into Nigeria very soon and we hope that Nigeria airlines will take the opportunity too, as they have already said they are looking forward to a Nigerian airline to partner with.”

Apart from the flight operations, the country is also planning to establish its embassy in the Federal Capital Territory, Abuja.

On his twitter handle ‘@hadisirika’, the minister said: “Cape Verde to open an embassy in Abuja this year and also to commence direct flight”.

Another source who is privy to the meeting said Cape Verde has agreed to fulfill all necessary commitment and go through the process in line with international best practices.

He also hinted that ‘Cape Verde is ready to begin the operation with its national carrier, Cabo Verde Airlines and they are looking at this year.’

According to the source: “The Nigerian Civil Aviation Authority will embark on inspection trip to Cape Verde to look at their facilities and their airlines in form of an audit before a final approval is given for them to commence operations into Nigeria.”

Nigerianflightdeck is an online news and magazine platform reporting business stories with a bias for aviation and travel. It is borne out of the intention to inform, educate as well as alter perceptions with balanced reportage.
Previous NAAE re-elects Nwose, other excos at Biennial General Meeting
Next FG should support Air Peace with flag carrier status-Governor Obiano