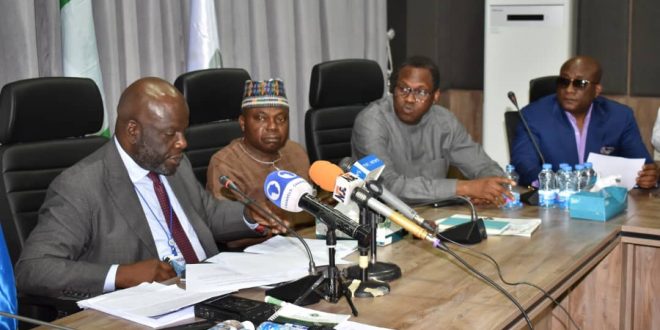 NIGERIAN Civil Aviation Authority (NCAA) has announced that the debt profile of airlines is put at N42BN and $7.8million for Ticket Sales and Passenger Sales Charges ( TSC/CSC) alone and the measures it has put in place is to ensure that these monies do not grow further and the debt are defrayed.

NCAA gets 58 per from the total 5 per cent of TSC/CSC and it is the major revenue earning for the agency, while the other four agencies share the remaining 42 per cent.

Azman Air last Thursday was first to feel the impact of this new regime as it was grounded due to tax clearance, and unwillingness initially to sign the MOU to remit legacy debt owed the authority.

The eight (8) year old airline was asked to sign an agreement with NCAA to pay N50 million monthly of its legacy Ticket Sales and Passenger Sales Charges ( TSC/CSC).

After negotiations, the NCAA said it ungrounded Azman Air and issued its Air Transport Licence ( ATL) because the airline met some outstanding conditions that hitherto led to the grounding and affected it’s chances of getting approval.

The NCAA said Azman was able to provide its Tax Clearance and put pen to paper for the MOU to enable the NCAA get a fair amount it’s accrued to N1.2bn which it owes the regulator

Although the Director General not the NCAA, Captain Musa Nuhu said this new enforcement would affect all debtor airlines when it was time for renewal he also said the move to sign the MOU was to ensure monies owed government was remitted.

In the past, charges like the Ticket Sales Charge and the Cargo Sales Charge( TSC/CSC) along with the Passenger Service Charges ( PSC) were collected at separate counters by officials of NCAA and FAAN, this caused a lot of clog to operations affecting on-time performance.

So to resolve this, these charges including TSC/CSC and PSC to passengers were introduced into the tickets so the passengers would have a one stop shop to fly instead of the rowdiness at the airport then and that was how it started.

Sadly, as the year went by airlines became emboldened and did not remit the funds which were not theirs, at a point a former AON representative said airlines should be changing government taxes for keeping funds in trust, this came up when the NCAA requested it’s payment.

Over the years, many airlines have gone under without paying that debt to the NCAA and other agencies, these have been written as bad debts.

The new move of late was that some airlines claimed that the TSC/CSC were charges the NCAA imposed on them even counting them among the 33 charges imposed, while the money continued to increase.

The debt profile of airlines is hit a staggering N42BN and $7.8million for TSC/CSC alone and to stop the increase the NCAA DG at a recent stakeholders meeting said that airlines will have to be remitting funds on a monthly basis to offset their legacy debts or risk non renewal of the Air Operators Certificate ( AOC) and Air Transport License ( ATL).

Captain Musa equally said that to prevent the debts from growing, the regulator had put in place a tripartite agreement; between the NCAA, airlines and the airlines’ banks that would enable it get its due without the current hassles or chasing them over debts.

He said,“…there are issues of the outstanding debts that need to be paid. So, we are working on the airlines, we know that if we tell them to give us all these monies at the same time, it is very difficult and not possible, so, what we have put in place in NCAA and to prevent the debts from growing, we have put in place a tripartite agreement; the NCAA, airlines and the airlines’ banks. So, once those funds go to the bank, the 5 per cent TSA/CSC is automatically deducted and goes into the NCAA bank and NCAA will share it with the other sister agencies on a pre-determined ratio as entrenched in the 2006 Civil Aviation Act.”

On the legacy debt that was the issue, he said that an MOU with the indebted airlines would be signed so a reasonable amount is paid to defray the current humongous debt and this entails to all airlines.

He also attached the conditions of Non- renewal of licenses to the debt stating, “What we have said is that if they don’t pay this legacy debt, we are not going to renew their licenses; AOC, ATL. That is one of the conditions and most of them have entered into the agreement. My account people are sitting with them so that they can make an arrangement on payment of a reasonable amount so that the debts can be cleared off over a short or middle time period,” he explained.

Nuhu said the regulatory agency had made efforts to recover the debt from the airline over the years, but the carriers were recalcitrant in paying back the sum despite collecting it from the passengers.

According to him, some airlines were trying to negotiate a debt owed that could have been remitted instantly to be totally defrayed from 12- 20 years which makes the money lose value

He said,”If we had agreed the N10 million monthly, it means it will take them about 12 years to repay back the money it had already collected and by then, the money would have lost.”

Nigerianflightdeck is an online news and magazine platform reporting business stories with a bias for aviation and travel. It is borne out of the intention to inform, educate as well as alter perceptions with balanced reportage.
Previous NCAA reissues Azman Air’s ATL for another five years
Next NANS commence protest at airports as gridlock hits Ikeja, passengers struggle to make flights