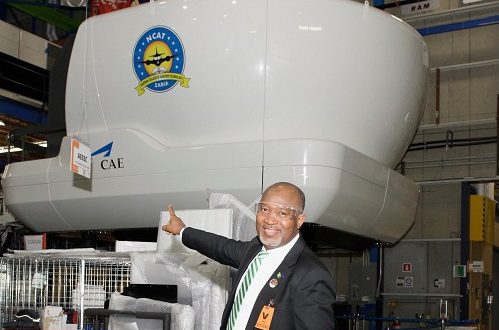 Much vaunted $21million B737 simulator lie ‘unprotected’ from elements in NCAT, Zaria

REPORTS indicate that the modern Boeing 737NG Full Flight Simulator (FFS) procured for about US$ 21million by the Federal Government of Nigeria and delivered since June 2020 may just be lying fallow and uninstalled at the Nigerian College of Aviation Technology (NCAT) in Zaria, Kaduna State.

This however has been denied by the NCAT management stressing that the dreaded COVID-19 pandemic is what has caused the delay of the installation and stressing that the simulator is shieded by a protective cover layer and not a trampoline as our reporter insinuated.

Federal Government of Nigeria had invested in the much vaunted equipment for the aviation sector to aid recurrent training as well as to tackle capital flight but it would seem that the multi-million dollar equipment despite  all said and done is still covered by a trampoline, outside in the elements, the reason its procurement was delayed. Read also: FGN to tackle capital flight with arrival of B737-NG Full Flight Simulator

In 2017, one of the reasons why the simulator manufacturer, CAE refused to ship the simulator was because there was no building ready to house it and they did not want the simulator to sit in containers.

According to the Rector of NCAT then, the contractors handling the building were told to expedite work so that by the end of 2018, the housing for the simulator would be complete stating that it would take the college at least six (6) months to erect a modern building for the sim.

The NCAT rector in an interview in 2019 stated that: “The simulator has been constructed, but it is there waiting for shipment; it is too big to enter a container. So, when they bring it in the container, they won’t be able to cover it. So, if they bring it in and the building is not ready, it would be exposed to the elements and that is why the manufacturer advised us not to expose it until the building is ready. This simulator is very sensitive to temperature and humidity and all the parts were made by Boeing. We believe that the simulator would be would be installed this year. Nigeria receives Boeing 737NG full motion simulator in Montreal, to take delivery in March

However video recording made available to Nigerianflightdeck.com indicates that the simulator is outside close to the flying school and subjected to the elements despite years of expecting the multi-million naira equipment .

In a reaction by the Nigerian College of Aviation Technology Rector, Captain Abdulsalam Mohammed on the installation of the simulator, he told our reporter,” If you look closer at the pictures you have, you will notice the fully completed building in the background. The Covid-19 pandemic is what is causing the delay in the installation.

“What you saw is not trampoline, but the protective covering placed by CAE. We’re waiting for the installation team to come and do the unpacking, to avoid damage to sensitive equipment. NCAT is very eager to see the simulator installed. Thank you for your concern.

However, an insider insists that there was crass lack of planning from when the school knew the simulator would come in and when the building would have been completed that: “..from the moment the contract was signed, till production and up until it was shipped to Nigeria is not enough time for authorities  who used its arrival as a publicity stunt to construct suitable housing.”Despite misconception, NCAT Zaria is safe for training-Capt. Abdulsalam

“Simulator is not something you buy from the shelf. From the time the contract was signed in 2017 till it was delivered in 2020. That is 3 whole years. That period was more than enough to construct the building to house the simulator. How on earth should you award the contract to construct the simulator after the simulator has arrived? What kind of crazy planning is that? So exposing the simulator worth over 9 billion naira to the weather elements is ok? The issue with Nigeria is that there are no consequences for serious lapse like this…” our source had argued earlier.

Nigerianflightdeck is an online news and magazine platform reporting business stories with a bias for aviation and travel. It is borne out of the intention to inform, educate as well as alter perceptions with balanced reportage.
Previous Expansion: Air Peace interconnects multiple domestic routes, resumes suspended routes
Next Air Peace takes delivery of first Embraer E195 becomes first in Africa to operate aircraft model