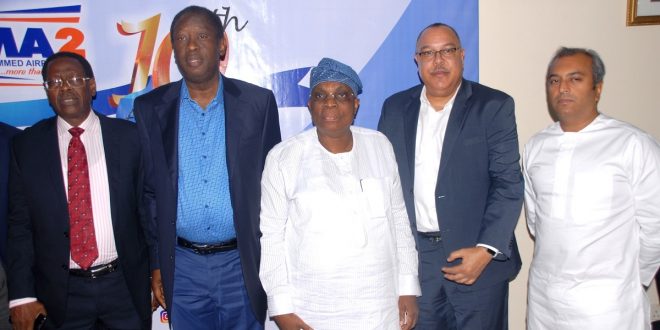 NigerianFlightDeck 7th May 2017 Aviation News Comments Off on [email protected]: BI-Courtney does not owe AMCON a dime, Babalakin declares 372 Views

CHAIRMAN, The Resort Group, Dr. Wale Babalakin (SAN) has declared that Bi-Courtney Aviation Services Limited (BASL) one of its subsidiaries does not owe the Asset Management Company of Nigeria (AMCON) a dime

Dr. Babalakin made this revelation as BASL operators of the Murtala Mohammed Terminal 2 ([email protected]) marked its 10th anniversary having begun operation on the 7th of May 2007

Giving a historical account of how BASL does not owe AMCON, the Resort Group Chairman stated that currently the Federal Government is indebted to BASL to the tune of N200billion being operations from the General Aviation Terminal (GAT) by Arik Air who refused to operate from the MMA2.

According to Babalakin, the agreement signed with government stated that all domestic operations from Lagos must emanate from the MMA, an agreement that Arik Air flaunted leading to some arbitration and court cases that ended up in BASL’s favour.

While seeking the assistance of all and sundry for the payment of the N200b (two hundred billion naira) owed to Bicourtney Aviation Services by the Federal Government of Nigeria he said,”As far back as 2012, the Federal High Court  awarded damages  of N132b ( one hundred and thirty two billion naira ) to Bicourtney Airways Limited.  Six appeals against the judgment in the Court of Appeal have been dismissed. Even the appeal to the Supreme Court by Arik Airlines through Ojemaie holdings was also dismissed. No nation can truly achieve its potential if it treats its dynamic citizens this way.”

He said,” MMA2 was built on the premise that all domestic flights from Lagos state must be operated from MMA2 and to ensure compliance government closed down the GAT completely. One day we woke up to discover that Arik has started flying from the GAT in defiance to the agreement.  And then we went for arbitration.”

“in 2009 there was development on GAT and we went to court for damages seeing that BASL had the right to first option for that terminal’s development. In 2012, court ruled in our favour for damages of N132billion, everyone went to Appeal; Federal government, FAAN, NUATE, ATSSSAN, in all there were six appeals and all were dismissed. And based on a court resolution, it was agreed that since FG was owing BASL and AMCON Is a parastatal of FG that the debt be taken from there. So based on Nigerian laws Bi-Courtney owes no dime to AMCON.”

Babalakin further thanked the airlines that have kept fate with MMA2 as well as its management and staff stating,” I must thank Dana Airlines, Medview airlines Azman Airline and Aero contractors who have continued to fly from our Terminal in compliance with laws of Nigeria even in the face of direct and subtle threats by the regulatory authorities. May the almighty Allah continue to grow your business and reward you for your steadfastness and demonstrable belief in the Rule of Law.”

“Permit me to thank the Management and staff of MMA2 who have worked diligently to ensure that the Terminal remains the envy of all Terminals in Nigeria today. I want to specifically acknowledge them for providing electricity continuously and an unbroken manner in this terminal. My gratitude to the Management is further enhanced by the fact that terminals who have more than 20 times our resources have experienced consistent blackouts while with our modest resources we have provided consistent electricity. Your effort is a demonstration that it we encourage the right persons in Nigeria sky would be the limit of our success.”

He said,”MMA2 is the first and only terminal to deploy such in Nigeria. The terminal has an obvious passenger and airline demand due to its safety, efficiency and technology. Over the years, MMA2 has been home to major airlines flying to various destinations in Nigeria.”

“MMA2 has handled over 20 million passengers, 400,000 flights and created employment opportunities for over 100,000 people in the past 10 years.

Nigerianflightdeck is an online news and magazine platform reporting business stories with a bias for aviation and travel. It is borne out of the intention to inform, educate as well as alter perceptions with balanced reportage.
Previous NCAA gears up to prosecute unruly passengers
Next BA offers Executive Club Members more benefits