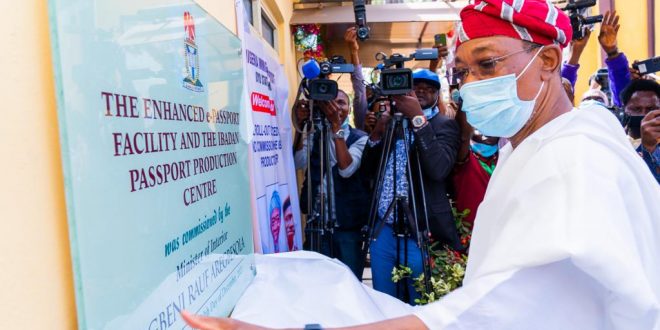 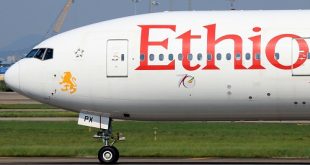 TOUTING and official meddlesomeness in Passport issuance has become a malaise the Nigerian Immigration Service (NIS) has been combating so to this end, Minister of Interior, Ogbeni Rauf Adesoji Aregbesola has assured full automation of all the Passport application processes will ensure the elimination of all forms of this trend.

The Minister made this known yesterday while launching the enhanced electronic Passport facility in the ancient city of Ibadan, Oyo State where he maintained that it has become necessary to ensure that application and payments processes for passport are migrated to digital platforms to eliminate any form of unprofessional conducts in the process.

Ogbeni Aregbesola reiterated his Ministry’s resolve to eliminate all manner of sharp practices through the deployment of online application and payment processes while calling on applicants to make conscious efforts to abide by the laid down procedures.

He stressed that the central aim of the reform efforts is to sustain the integrity of the Passport and the holders among comity of nations.

Speaking earlier, the acting Comptroller General of Immigration, Isah Jere Idris noted that deepening of the ongoing Passport reform efforts is one of the three-point agenda of his administration.

He assured that all measures have been put in place to ensuring that eligible Passport applicants get issued with the document easily. He reaffirmed the Service’s commitment to the timeline of six and three weeks to process fresh and renewal applications respectively in all its Issuing Centres.

He advised applicants to endeavour to turn in their applications on time to avoid last minute rush which often encourages sharp practices.

He further noted that a critical element of the event in Ibadan today is for the Minister to commission the enhanced electronic Passport Production Centre. The Centre, he said, will serve as the central Passport production facility for all the Passport Control Offices in Ondo, Osun, Ekiti, Kwara and Oyo. With the facility, all the Passport applications from any these locations shall be electronically transmitted to the Ibadan Centre for mass production. This he said, will save time and unnecessary waste of resources as well as improve the transparency of the entire process.

In his remark at the event, the Governor of Oyo State, Engr. Oluseyi Abiodun Makinde, represented by the Chief of Staff, Hon. Segun Ogunwuyi commended the Minister of Interior for his innovation and thanked the acting Comptroller General of Immigration for choosing the city of Ibadan as the first location for the centralized Passport production Centre in Nigeria. He assured of continuous government’s support for the activities of the Immigration Service in the State.

With the unveiling of the enhanced electronic Passport and the centralized Production Centre in Ibadan today, all the States in the South-West including Kwara have joined the rest of Kano, Port Harcourt, Lagos, Abuja, London, Gwagwalada among others on the enhanced electronic Passport regime. The enhanced Passport is an improvement of the current Passport with additional 25 security features. It comes in polycarbonate technology with a water-resistant data page. It is the latest technology in Passport issuance.

The event was attended by very important personalities including the Alaafin of Oyo, Oba (Dr) Lamidi Olayiwola Adeyemi III, the Olu Ibadan of Ibadanland, Oba Saliu Adetunji represented by Oloye Sarafadeen Alli, representatives of military, paramilitary and security agencies in the State among others.

Nigerianflightdeck is an online news and magazine platform reporting business stories with a bias for aviation and travel. It is borne out of the intention to inform, educate as well as alter perceptions with balanced reportage.
Previous FG to reciprocate ‘slot system’ to eliminate unfair commercial advantage by foreign airlines
Next Yuletide: FAAN, BASL assure travellers of safety, security