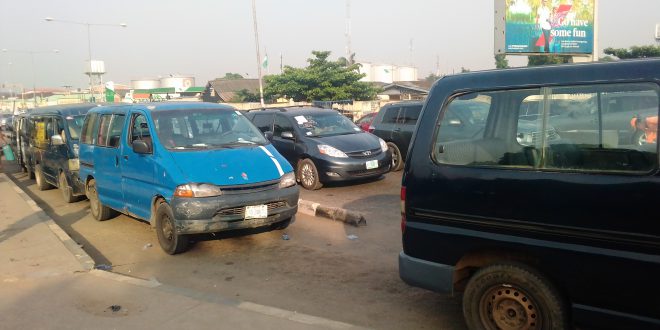 Grounded buses parked at the airport

BUS operators at the Murtala Muhammed Airport, this morning downed tools and shut down operations over what the described as illegal apprehension of their Chairman, Mr. Tijani Jelili and Public Relations Officer, Lukmon Abdullahi and the impounding of three vehicles by the Lagos State Task Force.

Nigerianflightdeck learnt that both officials of the Association of Limousine Bus Operators (ALBO) were whisked away by men of the Lagos State Task Force as early as 6:15am.

According to the association members who have downed tools causing passengers to walk long distances, what the task force was doing by harrassing them is illegal as the airport does not fall within their jurisdiction.

Secretary of ALBO, Augustus Amonimo who spoke to our reporter claims,”Lagos State Task Force are seriously harrassing us for no reason. They feel they don’t want to see our blue buses but we are registered under the airport authority Nationwide and not the state government.

Already, the bus operators are mobilizing to embark on a protest against this perceived injustice and have started calling out their members far and wide demanding the release of their two executives.

Buses were seen parked in their scores at the Local Junction Busstop with a crowd of angry drivers chanting and getting riled up.

“We wrote FAAN to give us a place around conoil and some of our people were there before these task force came and impounded those three vehicles as well as whisking away our chairman and PRO who came to intervene.

“The worse is they were shooting sporadically as if the ALBO were thieves. We will not operate until we get our people and get to the root of the matter, “Omonimo said.

As at the time of filing this report, vehicles were still unmoving.

Nigerianflightdeck is an online news and magazine platform reporting business stories with a bias for aviation and travel. It is borne out of the intention to inform, educate as well as alter perceptions with balanced reportage.
Previous Arik Air donates relief materials to Benin IDP camp
Next AIB to release 10 final reports in 90 days