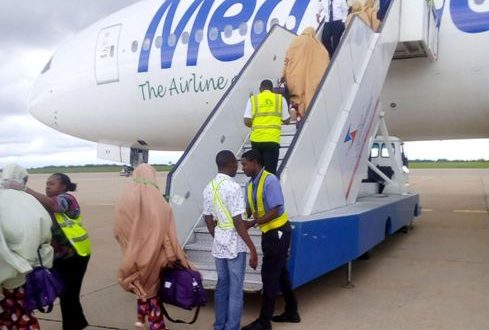 CONTRARY to statements credited to a top National Hajj Commission (NAHCON) official that Med-view Airlines will not be involved in the inbound airlift of pilgrims from Saudi Arabia to Nigeria, the airline on Friday has started airlifting its allocated pilgrims back into the country.

Med-view Airline commenced inbound airlifting of its allocated 5, 720 pilgrims with the return of the first batch of 547 pilgrims on its flight which arrived Kaduna International airport on Friday amidst jubilation.

The arrival of the pilgrims put paid to comments in certain quarters that Med-view Airline was not involved in the 2019 Hajj airlift.

According to the airline, another batch of 128 pilgrims are billed to arrive Kano, Yobe and Lagos today (Saturday) on Max Air Flight VM2020 in the arrangement made by the airline.

Med-view Airline is one of the three carriers contracted by NAHCON for the 2019 Hajj airlift.

NAHCON initially gave Med-View 5,720 pilgrims to airlift but later increased the number to 6,443.

The airline said the rest of the pilgrims will be airlifted according to the schedule drawn to meet the mid-September deadline for all inbound flights.

Nigerianflightdeck is an online news and magazine platform reporting business stories with a bias for aviation and travel. It is borne out of the intention to inform, educate as well as alter perceptions with balanced reportage.
Previous Nigeria Airline: When will we ever learn?
Next Photo Reel: Industry events that added colour, solemnity to the week