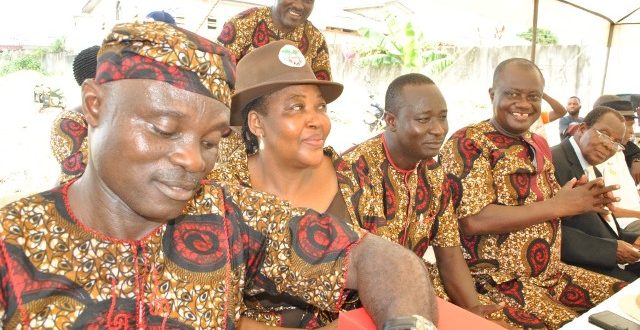 May Day Fallout: ATSSSAN reveal why it has ‘reduced’ agitation against concession

NigerianFlightDeck 2nd May 2018 Aviation News Comments Off on May Day Fallout: ATSSSAN reveal why it has ‘reduced’ agitation against concession 126 Views

AIR Transport Services Senior Staff Association of Nigeria (ATSSSAN), has said that the union has had a re-think of its open opposition to airport concession proposed by the federal government stating that labour had reasoned that should it continue to put up a hard stand, government would implement the plan and “we will begin to shout from outside.”

This is just as the union has said that the circumstances surrounding takeover of the managements of Aero and Arik Air by the Asset Management Corporation of Nigeria (AMCON) in the two airlines were different emphasizing that if they reacted negatively it would affect the workers which is their primary concern.

Speaking in Lagos today to mark this year’s Workers’ Day, National President of ATSSSAN Mr. Ilitrus Ahmadu said after a careful study and analysis of the programme, the union had decided to engage the federal government on the matter.

Ahmadu said it will not go down well with aviation unions should the government went ahead with the concession plan without input from labour and without resolving labour and related matters.

He said ATSSSAN would not joke with issues affecting its members stressing that “we don’t want our members to lose.”

“We have told the ministry of aviation that they cannot go on with the programme without engaging labour. We still believe that there are various alternatives to concession.

“Research shows that 80 per cent of airports hitherto owned by government have changed hands. The first thing government-owned airports did was corporatization. When the entities were transformed, they were no longer owned by the government. Why there is no foreign direct investment in our own case is that airports are solely owned by government.

“In South Africa, Singapore, airports have transformed to airport authorities. We don’t want our people to lose jobs; we hope that whatever model is adopted will be in the best interest of the workers, aviation industry and the government,” he said.

On the takeover of the managements of Aero and Arik Air by the Asset Management Corporation of Nigeria (AMCON), Ahmadu said the circumstances surrounding the intervention of the corporation in the two airlines were different.

He said AMCON had not been able to inject funds into Aero adding that the union wanted to shut down the airline but later had to shelve the plan.

“If we shut down Aero, it will not be in our best interest,” said the ATSSSAN chief and appealed to the workers to remain calm.

“The managing director (of the airline) has gone out of his way to meet even with the most revered traditional ruler in the country with a view to talking sense into AMCON.

“If the aircraft has three additional aircraft, there will be no need to continue with the redundancy agreement,” he said.

On Arik Air, Ahmadu said the airline’s fortunes were better than Aero’s at the time of the takeover.

“What Arik had as a problem was corporate governance. One commonest thing in the aviation industry in Nigeria is that anyone who has money just feels that they can run an airline. They don’t carry out proper feasibility study of the nature of the business,” he said.

Thereafter, he saluted the resilience of the Nigerian workers in the face of recession and expressed the hope that with the crude oil price at $75 per barrel, government will have enough money to pay the minimum wage that will be agreed upon.

“Nigeria has just come out of a recession, so to speak. National minimum wage is a burning issue. Deliberations are ongoing. There is a ray of hope. In this year’s budget we did not envisage that the price of crude oil will sour. It has increased to $75 per barrel. What this means is that if the trend continues, government will have enough money to put by for the minimum wage,” he said.

Tags May Day Fallout: ATSSSAN reveal why it has reduced agitation against concession

Nigerianflightdeck is an online news and magazine platform reporting business stories with a bias for aviation and travel. It is borne out of the intention to inform, educate as well as alter perceptions with balanced reportage.
Previous Imo State Government commends Dana Air for Owerri–Abuja flights
Next FAAN adopts cashless payment system across airports