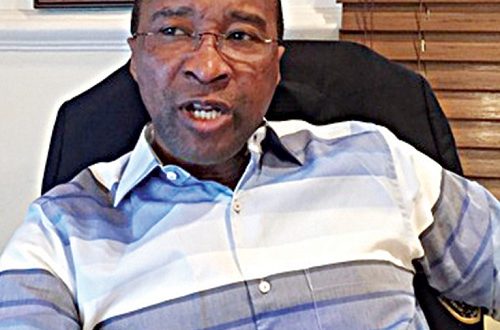 CHIEF Executive Officer of TopBrass Aviation Limited, Capt. Roland Iyayi, will be one of the two top aviation personalities that would deliver papers at the forthcoming 23rd annual conference and awards of the League of Airports and Aviation Correspondents (LAAC) .

The theme of the conference, which has been scheduled to hold at the Radisson Blu, Ikeja on Wednesday, July 17, 2019 is: ‘Boosting Aviation Investment Through Policy,’

Iyayi is set to deliver a paper on ‘Boosting Aviation Investment Through Policy: An Airline Perspective.’

Prior to setting up Topbrass, Iyayi had many years ago built Aeroleasing and Consultancy limited, an aviation consulting firm based in Nigeria charged with Research and Development and Strategic Planning, following which he held the position of Managing Director of the same company until his appointment to the position of Technical Advisor to the Honourable Minister of Aviation in Nigeria.

Roland later assumed the office of the Managing Director of the Nigerian Airspace Management Agency (NAMA), after being a member of the Presidential Task Force on Aviation in Nigeria.

Following this, he was appointed to the position of Acting Managing Director/Chief Operating Officer, Aero Contractors and charged with Corporate Development and Strategic Planning of the airline.

A qualified pilot and Air Safety Investigator with over 25 years industry experience, Iyayi also earned an MSc degree in Air safety Management from the City University of London and is a member of the Aircraft Owners and Pilots Association (AOPA) and National Business Aircraft Association (NBAA).

In addition, all Chief Executive Officers of aviation agencies in the country, would form a panel of discussants, while private service providers would also grace the occasion.

The event, which is expected to attract a large poll of aviation stakeholders, would be chaired by Alhaji Muneer Bankole, the Chief Executive Officer (CEO) of Med-View Airline.

Also, Dr. Harold Demuren, the former Director-General of the Nigerian Civil Aviation Authority (NCAA), who is the lead speaker would deliver a paper on: ‘Boosting Aviation Investment Through Policy: Government Perspective.’

Demuren is expected to share his wealth of experience after years of serving in both public and private sectors of the aviation industry. Demuren is currently the President of Flight Safety Foundation (FSF) West Africa.

Mr. Alnibus Chiedu, the Secretary, Conference Committee, LAAC, said that outstanding stakeholders made up of individuals and corporate organisations who had distinguished themselves in the industry would also be honoured with various industry awards at the event.

Nigerianflightdeck is an online news and magazine platform reporting business stories with a bias for aviation and travel. It is borne out of the intention to inform, educate as well as alter perceptions with balanced reportage.
Previous ASKY/Ethiopian Airlines inaugural flight to Jo’burg from Lagos starts with 70% load factor
Next International Day of the African Child: UBA Foundation celebrates with Special reading, mentoring sessions