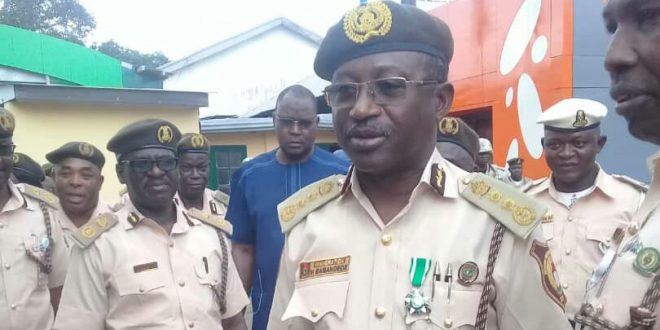 NIGERIA Immigration Service (NIS) may be implementing series reforms on the passport document before the end of the year including an increase of its validity to 10 years for adults over 18years, as well as plans to improve security of the e-passport.

NIS Comptroller General,Muhammad Babandede made this known at the Ikoyi Passport Office where he launched a Guaranty Trust Bank POS device that applicants can pay for passports with instead of cash transaction, also part of the reforms stating that officers of the service are no longer allowed to handle cash.

According to the Immigration boss, the President who approved the reforms for the service did so with the intent that the reforms will lead to far-reaching security and credibility of the passport document .

Babandede said,”Mr. President approved a lot of reforms, we hope to implement these reforms before the end of the year. 10 years after the epassport, it is a great system, digital, excellent and alright system but you can’t keep a system 10 years without improvement in security and so we have to improve certain measures which will raise the standard of our passport security higher.”

On the validity, he said,”We have approval to do 10 years validity for the passport, when the reforms are done passports will have validity of 10 years especially for adults from the ages of 18 and above and this is welcome too especially for Nigerians in diaspora, they have been yearning for this especially.”

“The National Assembly has submitted motions to ensure that same things happen the way it happens abroad and Mr. President has approved 10 years for adults and 5 years for children. I think this is what we should commend the president for listening to the people and making this a reality.”

“This will help us, it will be less work even if people will pay more. It is better they pay more for good passport security, 10 years validity and booklet will be available. It means those who come to us every five years will come to us after 10years.”

As part of efforts to curb corrupt practices the Comptroller General read the riot act to officers warning them that if caught with cash it will be used as exhibit for their punishment .

He explained that New Works installations signed agreements with NIS to collect payments but we’re doing so by hand for 10 years until the new directive of the president which led him to initiate the POS payment.

” Since we started 10 years ago, the payment has been with hand and if we want to be inline with the directive of Mr. President, Mr. President says we should try fight corruption but we can’t fight corruption if our officers have access to cash we can’t do that, the best we can do is to ensure we reduce their access to money, So they don’t see the money, if they don’t see the cash, they can even concentrate better on the machines, they won’t make mistakes, they can capture people properly. Service would be delivered.”

The immigration boss also said the passports will soon give opportunity for the National Identity Number (NIN) to be embedded within to enable a harmonized data stating that only criminals who have nefarious thoughts will not want that.

“Another reform approved by mr. President is that we must make sure all passport offices must  give opportunity for national identity number. Now all passports booklets must contain the NIN number, this is important for our nation’s collective security, social security, economic issues, planning. It will be on that passport so our data will be harmonized. ”

And on scarcity of booklet, he appealed for calm stressing that the situation is being handled but in the long-term, plans are underway to ensure the booklets can be produced in the country, instead of the present situation.

“On booklet scarcity, today we are doing all we can to ensure booklets will be produced in Nigeria this will end such scarcity. The process of doing that will be followed.”

Nigerianflightdeck is an online news and magazine platform reporting business stories with a bias for aviation and travel. It is borne out of the intention to inform, educate as well as alter perceptions with balanced reportage.
Previous MMIA records over 12,000 visas on arrival in 6months- investigation
Next ‘National carrier must not be given unfair privileges’