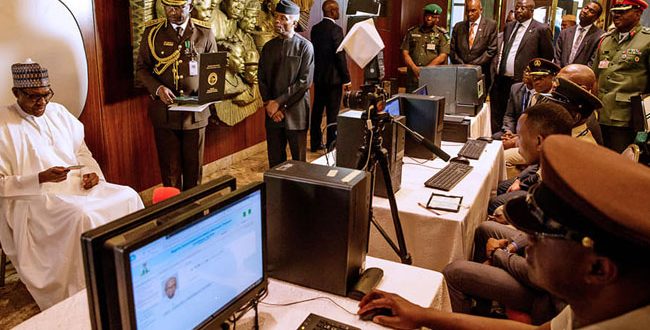 How new enhanced passport will work for Nigerians, curb data fraud, other vices

Today the Nigeria Immigration Service has rolled out the new enhanced poly-carbonate 10 year validity passport, Nigerianflightdeck was at the pre-event and looks at the need for this document and the security situations it will combat.

AS the Comptroller General of the Nigeria Immigration Service, Muhammad Babandede, rolls out the new 10 year validity passport at the Ikoyi passport office today, the question on the lips of many is what differentiates this document from the already existing one apart from the validity?

Earlier today, Acting Comptroller General Zone A, Mohammed Alhaji Alfa fde initiated the roll out in the stead of the Immigration boss as the Deputy Governor of Lagos, Femi Hamzat was on ground to capture as the new document commenced at the Ikoyi Office in Lagos after a successful roll out in Abuja.

The Enhanced E-Passport is part of the new reforms approved by the Federal Government of Nigeria and a product of intensive review of the existing e-passport booklet which has been in circulation for over 10 years and has only 5-year validity.

Features and benefits of the Enhanced E-Passport Reforms include introduction of a new security enhanced passport; poly-carbonate technology that enhances the quality of the passport; ten year validity booklet that saves frequent visit to passport offices as well as automation of issuance process to bring about transparency and address touting / middlemen.

Truth be told, this document was borne from the collective ideas of various top ranking NIS officials, foreign experts and the yearnings of Nigerians living in the diaspora where Nigerian missions are unavailable.

The document was also tinkered out of the motive to strengthen the already existing one and improve its security features a hundred fold, and so the need for data harmonization and curb other excesses that have been hitherto prevalent.

There are three different Nigerian passports and certain class of people are entitled to only the standard passport and one of either the Diplomatic passport which is red or the sky blue government official passport, which is returned after they serve out whatever tenure they have.

Data fraud, passport mutilation to cause forgery, manhandling the physical document, even the intent to have more than one of such document at a time as well as other passport related fraud are being addressed with this document.

The new poly-carbonate passport document, according to the immigration boss, addressed the duo challenges of duration for those in countries without Nigerian missions and some deep security issues.

According to him, over 21 security features are embedded within the new document to make it more valid, authentic and credible as a document.

With the document’s linkage to other security portals like the Bank Verification Number ( BVN) and the National Identity Number ( NIN), it becomes near impossible to alternate the document or change data within it once produced.

Babandede revealed,” And I am glad to say the new passport we are going to roll out there tomorrow, after Mr. President rolled out the pilot in Abuja in January 15, It’s a different passport,it is a poly-carbonate passport and has a lot of features, this passport is different from the previous passports, this is an outcome of in-house analysis by us, we had a conference in Abeokuta in 2017 with all the while officers and other stakeholders including airport professionals from Frankfurt, London and they gave us views about our passports based on that analysis we came out with this passport.

He reeled out some set backs the standard passport has and enumerated how the NIS has been able to upgrade the features and name it better in the new document.

“In the standard passport, data page was in the cover, once it was in the cover people used to remove the laminate and forge but this is difficult because it’s poly-carbonate, secondly the cover is very weak before, if you check the texture of the cover, you find out that they are different. Even the writing is laser. This passport can stay longer time for the period of 10 years without.

On the integrity of the document, the immigration boss said it would be very difficult to forge, mutilate or change details within it and thus called on Nigerians to harmonize their details sincerely to avoid discrepancies that will affect them in a he immediate or far future.

“Nigerians are advised to make sure they have same identity, how do you ask us to help you when you have a name that is Baba and then you went to register with NIN, Ahmed Baba and then come with a document with my name Ahmed Babandede, it’s not possible because they are different identities. Nigerians are advised to harmonize their identity. One identity for Nigerians, you can’t cheat. Law enforcement can put your name on the system and see you have a passport, a bank account identity, that is development , it helps social development, it helps economic development, it helps national security.

“So people should be ready when it’s rolled out in Ikoyi. If you want to get this passport it’s time you harmonize your identity. Make sure your bank account is the same story o, cos if you have a bank account with sewerage name, it won’t work.

He went further to explain how some Nigerians want to change identity for flimsy reasons and how this, in its way affects the authenticity of the passport document as well as the country’s image.

“There was a case of someone who wanted to change data and spent three months, now it will be more difficult to change data now. Let’s see where you start, are you going to change the name in your bank account? Or the NIN number in your passport? It’s going to be difficult so Nigerians should have only one identity. You can’t come to us and say you want to change your passport data, ‘I realized that yesterday I slept and had a dream and my name was bad luck, I have changed my name’ we can’t change it for you, we can’t change the bank account or your NIN, you are advised  to have one single identity for life, that is important.

“A lot of Nigerians change their name, some complains we have, some people arrive Germany , or New York and suddenly say they want to Change their name, how did you arrive New York ? You arrived with the name, some of them arrive those countries and declare false asylum. Someone will go and say he is pursued by witchcraft, or because he is a victim of Boko Haram, or he declares another name and you expect us to give you a passport with another name? We already know you with a name, you have an affidavits before going now you want us to change it.

“Let’s say you arrive US, you get a bank loan,took social security and all and all of a sudden you want to change your name or your whole era because you wake up from a dream and real used the name they are having is an evil name…if they change name, gave they not run away from the debt they collected from the bank? Please Nigerians, I want you to bear with us.

“We will share a lot of data fraud with you , we have our lawyers he, we are prosecuting. For example, this affects big business men who deliberately declare their passport lost and get another passport but now we have included the number of your previous passports so when you get your new passport, you will see your previous passport. Not only that, we declare that passport wanted, so f you come to the airport, we arrest you, it’s really big business for them in Lagos. We arrest them and tell them this passport you are traveling with, you declared it lost last year and now you want to use it.

Then there is also a fear when it comes to authentic change of names especially for married women and those who are no longer married and want to revert to their maiden names.

Babandede explained that before women used to travel from all over Nigeria to Abuja to get the change of name done until the service made it that change of data for married women should be done in the state where they reside.

“People should appreciate what we have done. When we came on board, change of data was rampant, before we came on board people travelled all over Nigeria from Borno, to Port Harcourt to change their data. We said look, we know those who change their data that are not a risk, women changing their data when they marry or divorce, we say No you can do it in your state of origin. Women are not affected because it is not their fault they got married neither is it their fault their husband died so they want to change their name to their maiden name.

Nigerianflightdeck is an online news and magazine platform reporting business stories with a bias for aviation and travel. It is borne out of the intention to inform, educate as well as alter perceptions with balanced reportage.
Previous FAAN steps up surveillance on bag tagging at nations’ airports
Next Perceived disharmony among agencies, hurting aviation- Captain Egonu