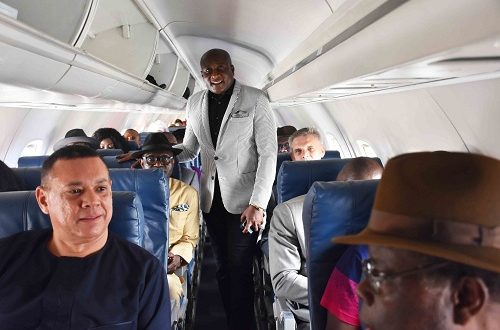 The flight operated by Capt. Crosby Otobo and his crew took off from the Murtala Muhammed Airport, Lagos at about 2.50 p.m. and landed on the 3.5-kilometre runway of the Bayelsa International Airport at about 3.35 p. m.

The flight was welcomed by a crowd of overjoyed indigenes and residents of Bayelsa, including the state Governor, Henry Seriake Dickson and top government officials.

The flight was also honoured by men of the Fire Service Department, who positioned with their trucks on both sides of the runway and sprayed arcs of water to salute the aircraft.

Speaking at the Bayelsa Airport moments after Air Peace flew into the facility, the airline’s Chief Operating Officer, Mrs. Oluwatoyin Olajide said the airport would be a vehicle for the industrial and economic development of the state.

“Air Peace is an airline of many firsts. We are indeed honoured and delighted to make another history as the first commercial airline to operate into the Bayelsa Airport. We commend His Excellency, Governor Henry Seriake Dickson for this great project aimed at opening Bayelsa State up for rapid industrial and economic development. Since we commenced commercial flight operations over four years ago, Air Peace has greatly contributed to the development of cities and states we operate into.

“We have no doubt that the Bayelsa International Airport will provide us an opportunity to support the effort of the Bayelsa State Government to develop the state. It is indeed a new dawn for the people and residents of Bayelsa State. We urge the flying public and the business community to take advantage of this wonderful facility to break new grounds and realise their business and leisure interests”, Olajide said.

The airline, which is credited with many recording-setting events, including being the first to acquire and register a Boeing 777 in Nigeria as well as the first carrier in West Africa to order the Boeing 737 MAX 8, flew a 50-seater Embraer 145 jet into the Bayelsa International Airport.

Nigerianflightdeck is an online news and magazine platform reporting business stories with a bias for aviation and travel. It is borne out of the intention to inform, educate as well as alter perceptions with balanced reportage.
Previous Celebrities light up FAAN airports for Valentine Day Special
Next EAN Aviation gets AMO approval to carry out wheel covers inspection, repairs