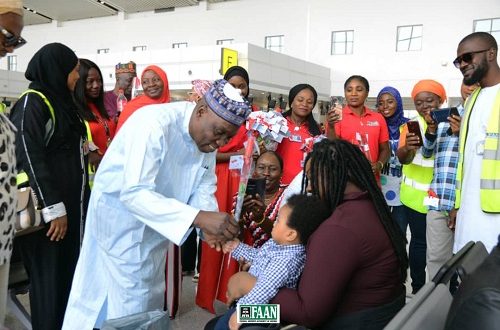 LOVE was truly in the air as some major airports under the management of the Federal Airports Authority of Nigeria (FAAN) treated passengers to a Valentine Day experience with love, red roses and the personal touch of celebrities including actress and comic Chioma Omeruah also Known as Chigurl.

The actress, comic was on ground at the General Aviation Terminal (GAT) and the Murtala Muhammed International Airport (MMIA) where she interacted with passengers and raised the mood around the terminal with dozens of her assistants, beautiful ladies dressed in red portraying the reason for the season.

Hundreds of Roses were handed out to passengers, pictures taken with scores of passengers, airport officials and a just about anyone who wanted to have a picture with the star.

The peak of the event at the GAT was when Chigurl was introduced to a Valentine’s Day celebrant, a staff in the operations department of FAAN, Mrs. Doris Emoruwa at the VIP lounge where she sang a birthday and valentine song for the celebrant.

At the International Wing of the Airport, appreciative passengers took turn to have a photo shoot with the star while she handed roses to them.

Chigurl also met with the Airport Manager, Mrs. Victoria Shinaba who was expressed happiness about what was going on.

At the Nnamdi Azikiwe International Airport ( NAIA), things were no different as theManaging Director FAAN, Engineer Saleh Dunoma was also in the valentine spirits as he took numerous shots at the airport and spread the love round.

Comedian Chuks the Great was also on ground to dazzle and liven up the mood at the NAIA, as arriving passengers were pleasantly surprised on the noveau thing the airport management was doing.

Valentine is a season to show love and FAAN in its own way, made sure it spread the love and recipients loved it.

Nigerianflightdeck is an online news and magazine platform reporting business stories with a bias for aviation and travel. It is borne out of the intention to inform, educate as well as alter perceptions with balanced reportage.
Previous Poor radio communications: NATCA charges FG to provide financial buffer for NAMA
Next Governor Dickson applauds as Air Peace operates into Bayelsa Airport