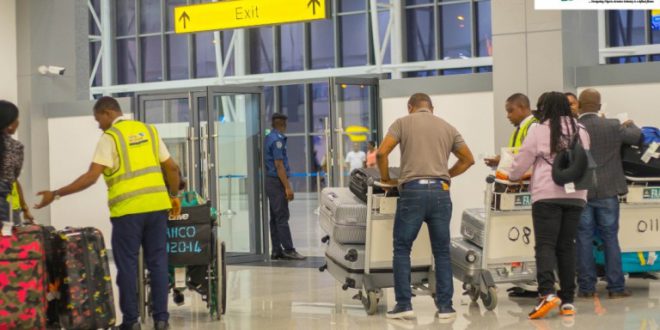 A stable business environment, huge market size, large profitability index; these are all parameters used to evaluate investment opportunities in any sector and the Federal Airports Authority of Nigeria (FAAN) through its National Aviation Conference is set to harness these variables to attract local and foreign investors.

FNAC, borne of the need to find solutions to teething challenges in the Aviation industry and other relating industries, is also aimed at providing coordination for the entire aviation industry so as to create momentum and thrust among policy makers, agencies executing those policies, airlines, stakeholders and general businesses in an effort to grow them all together and set them on the part of profitability.

It is against these backdrops that the Federal Airports Authority of Nigeria (FAAN) took it upon itself to organize the interactive brainstorming session, National Aviation Conference from the 1st to 4th of April, 2020.

This Conference with theme ‘Advancing the Frontiers of Possibilities for Safe, Secure and Profitable Air Transport’  is aimed at stimulating stakeholders, regulators, industry players, investors and participants to tell each other hard truths and determine ways on how to surmount their woes from all perspectives.

At a recent meeting with aviation unions in FAAN, Managing Director of the agency, Captain Rabiu Hamisu Yadudu explained the importance of the planned conference, describing it as a no hold barred conference aimed at coordinating the industry and collecting data that would help uplift the industry.

Yadudu said,”There is no single platform to coordinate this industry, the problems, the challenges; the achievements. We plan and receive inputs from all stakeholders so this is a national aviation conference. We call it the FAAN National Aviation Conference but in truth, it is not for FAAN alone but if need be we will sponsor it alone even if it means 100% but it will be equal opportunity for all the agencies and stakeholders.

“Primarily, it will coordinate Nigerian Aviation and give everyone a platform to give his or her contributions.

Topics like, Implementing Single African Air Transport Market (SAATM) Prospects and Challenges, Collaborative Service Delivery in Nigeria Air Transport Industry: The Way Forward; Procurement and Maintenance of Safety Critical Facilities in the Aviation Industry: Getting it Right and Addressing Nigeria’s Unviable Airport Syndrome and The Ease of Doing Business as a Panacea for Boosting Investments In Nigerian Airports will be thoroughly discussed by seasoned professionals in their spheres.

Other than the brainstorming session, FNAC  plans to focus on an investment forum which will consider opportunities in Nigerian Airports to commercially stimulate its airports and ensure it create access for alternate means of generating revenue through funding and innovative ideas.

The Conference will also focus on diversification of revenue sources with emphasis on non-aeronautical sources including airport advertisements, tourism as well as land development.

Head, Research Zenith Travel, Mr. Olumide Ohunayo said the conference  is a welcome development and a pivotal program that envelops the entire industry not just what FAAN wants explaining that there may have been a realization that without each other, the industry will not grow.

“What we have been having in the past is that every agency, like FAAN used to do in the past, do a program or call stakeholders together to discuss their own aspect of the industry but this one is all about aviation. How to move aviation forward? How do we develop the industry? And ensure there is an even development. I’m sure they’ve realized that without airlines and other aspects of aviation, airports itself will not be viable. This is about the best in the industry with what I am seeing now which will happen from the 1st to 4th of April,” he said.

“They have taken all subjects and consulted widely with stakeholders on areas of discussion and they have picked acute professionals as panelists and discussants so I expect some positivity from this program and as I said before this is the first time an agency will take issues that envelop the whole commercial aviation sector, in economic, commercial, regulation and safety and all are put together in this one week…”

Managing Director, FinchGlow Group, Mr. Bankole Bernard described the conference as a good idea but insists that the downstream sector, made up of the travel agencies should be represented in the forum because of their importance in the sub-sectors growth.

Bankole explained that there are certain things that travel agencies can bring to the table that should be key in whatever resolution that would be reached.

Bankole said,” In the first place, without the travel agencies airlines cannot distribute and we contributed as at 2009 N334billion to the Gross domestic Product, you cannot say that does not have significant impact on the GDP.

“ The body that represents the downstream sector need to be part of this, because there are over 9000 IATA and non IATA travel agents in the country and they need to be regulated and the essence of this stakeholders’ conference is to make sure the entire industry works from the microcosm up to the macro-level.

In truth, stakeholders want to be part of this novel idea to air their piece on how they can help to move this industry from the doldrums and feel that the National Aviation Conference gives them opportunity to contribute their quota to improve the sector. A lot rests on this maiden conference and its outcome will be the bedrock to project the industry from and improve it.

Nigerianflightdeck is an online news and magazine platform reporting business stories with a bias for aviation and travel. It is borne out of the intention to inform, educate as well as alter perceptions with balanced reportage.
Previous COVID-19:  Health Minister explains why Nigeria refuses to implement travel bans
Next Air Peace enacts protective measures for passengers, staff against COVID-19