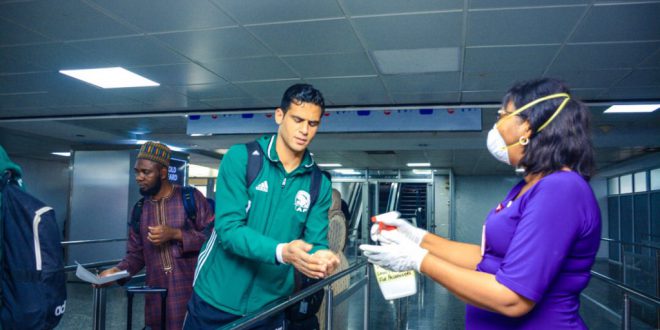 MINISTER of Health,  Dr.  Osagie Ehanire has declared that Nigeria has not placed travel bans on any country following the declaration of the World Health Organization (WHO) classifying the Virus as a pandemic but that the country has issued travel advisory seeking Nigerians restrict movement to high risk areas.

This is as he explained further that there was no need for the travel bans as yet as the world as we know it is already self isolating and restricting their own movement and coupled with the far reaching economic implications, there was no need as all economies are already facing the impact of the COVID-19.

In the COVID 19 Update monitored by Nigerianflightdeck, the Minister also said that though there is a prospect of the virus spreading through land borders and sea borders but that the higher risk lies in flights and that is why focus is at the nations international gateways as they can carry people quickly from these endemic nations.

He also urged the authorities in charge to provide space for isolation at the international gateways stating that the Ministry of Health will advise the Federal Government and not embark on knee-jerk reactions since the world is also isolating itself since the outbreak of the virus.

Dr. Osagie further released cheering news that of the two quarantined cases of the COVID-19 virus one has tested Negative after being positive while the index case is responding fast and may be discharged to their families in a matter of days.

“We have noticed a lot of things and first of all there is already self restriction if you listen to stories of those travelling through Heathrow, they’d tell you that its almost empty, there is a reduction in passenger movement, airlines are cutting flights. So without banning anybody, there is already a restriction of movement in place without expressly banning this or that.

“Many airlines are discovering that if you take a flight that takes 10X amount of dollars to operate and you have passengers onboard that give you only 1Xreturn then that flight is not worth it, they cancel flight, so a lot of flights are cancelled people are restricting themselves, so that self restriction is in place without us doing anything.

“If you are fighting a battle, you should know where the real battle is and we are not saying there is no chance that the virus can slip in through our land and sea borders, but we are saying it is faster through the airports especially as connecting from those budding countries are easy.

“We are also saying we will not ban flights when it has not come to that we are advising Nigerians to delay or postpone travels to those high risk countries except it is necessary and we are also enjoining countries of departures to carry out screening on passengers that leave their country so we will have a better chance at identifying the virus on arrival.

He noted that Centers for Disease Controls (CDCs) worldwide are talking to themselves and that is how Nigeria was able to Identify and isolate a family of four from Washington who had contact with a case of the virus but that family has tested negative.

According to the Health Minister, the risks we have in Nigeria from the COVIS-19 are relatively low and it is being monitored very closely.

For him, the situation determines the measures to be taken which he described as appropriate to the situation, stating that the nation does not want the measure to be too much and not too little.

On isolation centers, he stated that the country had a lot of them but they were for various other ailments but centers for COVID-19 are being put together and there are redundancies to ensure that there are enough.

Nigerianflightdeck is an online news and magazine platform reporting business stories with a bias for aviation and travel. It is borne out of the intention to inform, educate as well as alter perceptions with balanced reportage.
Previous Air Peace improves customer experience with new mobile app
Next FNAC 2020: Creating Investment opportunities while tackling aviation’s challenges