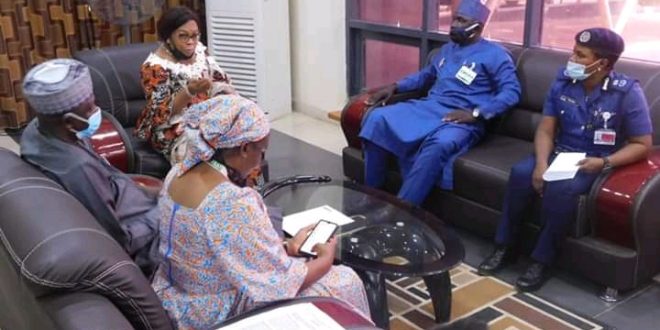 FEDERAL Airports Authority of Nigeria (FAAN) has inspected facilities at the Ibadan Airport with plans to boost its capacity and revenue generation.

The team was met by Ibadan Airport manager Mrs Aiyenuro O., Acting Chief of Security Mrs Oke-Egbe S.T and Mrs Oyebamiji Head of Department(Operations) who proceeded to take the team round to inspect facilities on ground.

The visiting team inspected the FAAN generator house, the fire department where facilities such as the Watchtower, ambulances, and fire trucks were also inspected for functionality.

After the inspection the team visited the University College Hospital (UCH) to pay  a courtesy visit to the Deputy Chief Medical Director as well as check on a Nigerian Meteorological Agency (NiMET) staff who sustained gunshot injury during a recent armed robbery attack at FAAN staff Quarters 2 in Ibadan.

On their return to the airport, the team also visited FAAN Medical clinic, Staff Quarters 1 and 2 followed by a two hour meeting chaired by Mrs. Aboderin before departing for Lagos

Nigerianflightdeck is an online news and magazine platform reporting business stories with a bias for aviation and travel. It is borne out of the intention to inform, educate as well as alter perceptions with balanced reportage.
Previous Delta to block middle seats, limit onboard capacity through March 30, 2021
Next Public hearing, Immigration, Dana’s returns flight to Enugu and lots more