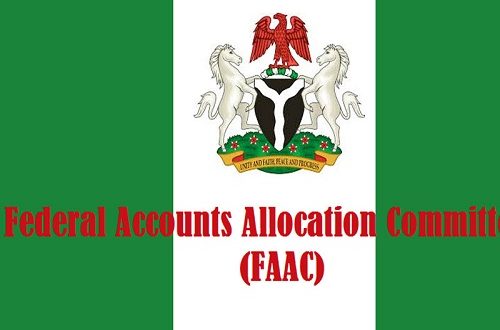 FEDERAL Accounts Allocation Committee(FAAC) has shared N619,857 billion federal revenue generated in the month of February 2019 among the three tiers of governments

This is just as the FAAC has announced that the Excess Crude Account has the sum of $183million as at March 27, 2019.

A communique issued by FAAC indicated that from the total revenue of N619,857 billion Federal Government received N257.681 billion, while states and local governments got N169.925 billion and N127.722 Billion respectively.

According to the statement, the gross statutory revenue for the month was N 478.434 billion; revenue from VAT was N96.389 billion, Exchange gain was N0.858billion while forex equalisation revenue was N44,176 billion

The gross statutory revenue of N 478.434 billion which was received for the month of February was lower than N505.246 billion received in the previous month by N26.812billion.

The gross revenue from VAT was N96.389 billion as against N104.468 billion distributed in the previous month, resulting in a N8.079 billion decrease.

The communique also revealed that for the month of January 2019, the federation crude oil sales increased by 46% which resulted in the increase of federal revenue from $425million to about $574.95 million

Nigerianflightdeck is an online news and magazine platform reporting business stories with a bias for aviation and travel. It is borne out of the intention to inform, educate as well as alter perceptions with balanced reportage.
Previous Delta Govt says Asaba Int’l Airport is open to facilitate investment
Next Tourism needs culture to reach full potential in Nigeria-Otunba Runsewe