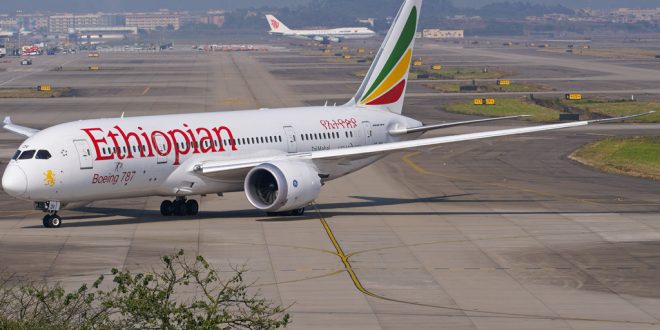 Ethiopian Airlines has placed an order for 10 additional Airbus A350-900 aircraft, enabling further development to its fast expanding long-haul route network.
This is just as the airline has signed a firm commitment with Boeing to purchase two 777 Freighters at the 2017 Paris Air Show, valued at $651.4 million at list prices.
Last June, Ethiopian Airlines became the first African carrier to operate the A350 when it took delivery of the first of 12 aircraft in order. Today the carrier operates a fleet of four A350s, two of which are on lease. Today’s order tops-up the Addis Ababa-based carrier’s fleet, enabling it to pursue its growth strategy and objectives over the coming years.
Ethiopian Airlines’ A350-900s are configured in a two class layout seating 30 passengers in
Business Class and 313 in Economy Class. The spacious, quiet interior and mood lighting in the cabin contribute to superior levels of passenger comfort and well-being.’

“Operating the youngest fleet in the industry with modern and comfortable customer features in cabin is one of the four pillars in our 15 years strategic road map, vision 2025, and this order placement for additional A-350s is one component of this strategy. The performance, operational and cost efficiencies we have achieved with our initial A350-900s have resulted in these additional ten aircraft order placement and thereby suffice our ever-expanding global network. We will deploy the additional aircraft on our long haul routes connecting Addis Ababa with destinations in Africa, Europe, the Middle East and Asia,” explained Tewolde GebreMariam, CEO of Ethiopian Airlines.
“Ethiopian Airlines’ repeat order is a resounding endorsement of the A350, its suitability, flexibility and unmatched economics. We are delighted that the innovative aircraft -the A350- is closely associated with the world’s fastest growing and profitable carriers,” said John Leahy, Airbus Chief Operating Officer Customers. The A350 features the latest aerodynamic design and materials, including its carbon-fibre fuselage and wings. It is powered by new fuel-efficient Rolls-Royce Trent XWB engines. Together, these advanced technological features translate into unrivalled levels of operational efficiency, with a 25 per cent reduction in fuel burn and emissions in addition to significantly lower maintenance costs. Ethiopian operates the youngest and most modern fleet with an average fleet age of less than five years

Meanwhile, on the $651.4million 777freighter order, the airline states that it will be reflected on Boeing’s Orders & Deliveries website once it has been finalized.
The airline also announced an order for 10 additional 737 MAX 8 airplanes. The 10 737 MAX options being exercised were part of a deal signed in September 2014, completing the largest ever order for the 737 MAX in Africa. Ethiopian now has firm orders for 30 737 MAX 8s. The order was previously attributed to an unidentified customer on Boeing’s Orders & Deliveries website. “Building one of the largest cargo terminals in the world and operating new-generation, high-performance aircraft reflects our commitment in expanding and supporting the exponentially growing imports and exports of our country in particular and the African continent in general. The commitment to purchase 2 B777 Freighters is expected to boost the Ethiopian Cargo & Logistics Services,” said Tewolde GebreMariam, GCEO of Ethiopian Airlines. “The 737 MAX will form a key component of our strategic roadmap, vision 2025, enhancing our single-aisle fleet and keeping us at the forefront of African aviation. This is a continuation of the longstanding and commendable business partnership we had established with Boeing.” The 777 Freighter, the world’s longest-range twin-engine freighter, is based on the technologically advanced 777-200LR (Longer Range) passenger airplane and can fly 4,900 nautical miles (9,070 kilometers) with a full payload of 112 tons (102 metric tonnes or 102,000 kg).

“The 777 Freighter’s range capability, combined with its enhanced cargo capacity, makes it the perfect airplane for Ethiopian to continue to profitably grow its global freighter service, linking trade routes between Africa, Europe, the Middle East and Asia,” said Ihssane Mounir senior vice president of Global Sales & Marketing Sales, Boeing Commercial Airplanes. “We are also delighted to be able to announce an additional order for 10 737 MAXs. This order is a continued endorsement by Ethiopian of the 737 MAXs efficiency, range, reliability and operating costs.” The 737 MAX incorporates the latest technology CFM International LEAP-1B engines, Advanced Technology winglets and other improvements to deliver the highest efficiency, reliability and passenger comfort in the single-aisle market. The 737 MAX is the fastest-selling airplane in Boeing history, accumulating more than 3,700 orders from 87 customers worldwide. Ethiopian Airlines (Ethiopian) is the flag carrier of Ethiopia. During the past seventy plus years, Ethiopian has become one of the continent’s leading carriers, unrivalled in Africa for efficiency and operational success, turning profits for almost all the years of its existence. Operating at the forefront of technology, the airline has also become one of Ethiopia’s major industries and a veritable institution in Africa. It commands a lion’s share of the pan African network including the daily and double daily east-west flight across the continent. Ethiopian currently serves 100 international and 21 domestic destinations operating the newest and youngest fleet.

Nigerianflightdeck is an online news and magazine platform reporting business stories with a bias for aviation and travel. It is borne out of the intention to inform, educate as well as alter perceptions with balanced reportage.
Previous ART commends Presidency’s move to improve aviation
Next NAAPE VP, Engineer Ahmed enters Presidency race promises rebirth