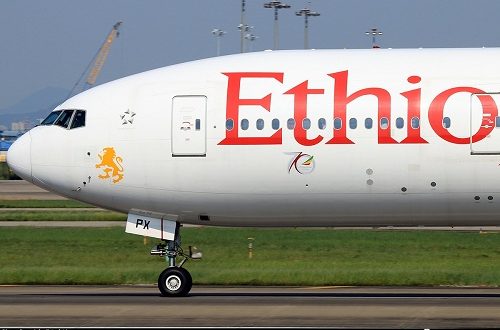 ETHIOPIAN Airlines has said its pilot on Flight ET 901 encountered bad weather while trying to land at the Murtala Muhammed International Airport (MMIA) today causing him to make a go round before landing safely.

The airline reacting to the incident that widely reported that former President Olusegun Obasanjo and 392 passengers including Director of Ports Inspection, National Agency For Food And Drug Administration And Control (NAFDAC), Prof Samson Tunde Adebayo, Director General of Nigerian Association of Chambers of Commerce, Industry, Mines and Agriculture (NACCIMA) Ambassador Ayoola Olukanni were reportedly on board the aircraft.

A statement signed by General manager, Ethiopian Airlines in Nigeria, Firihiewot Mekonnen read: “Ethiopian Flight (ET 901/29 MAY) which departed from Addis Ababa on its way to Lagos had encountered bad weather during landing and made a go-around the airport for better and smooth landing, according to the procedure.

“On a second attempt, it made a safe and normal landing. According to safety standard, pilots are encouraged to make a similar go-around in such cases. However; some media incorrectly reported this standard safety precautionary go-around.

The Federal Airports Authority of Nigeria (FAAN) confirming the incident said the flight, which tried to land at about 1157hours had earlier mis-approached due to bad weather and immediately went up to position properly for landing.

The airport authority stated that the aircraft landed safely at exactly 1213hours and parked at gate E63.

FAAN also confirmed that the Ethiopian flight had departed Lagos for Addis Ababa at 1351hours.

Nigerianflightdeck is an online news and magazine platform reporting business stories with a bias for aviation and travel. It is borne out of the intention to inform, educate as well as alter perceptions with balanced reportage.
Previous Ethiopian Airline ferrying Obasanjo, 392 others aborts landing at MMIA runway in Lagos
Next Captain Yadudu explains go-around, says airline followed safety procedure