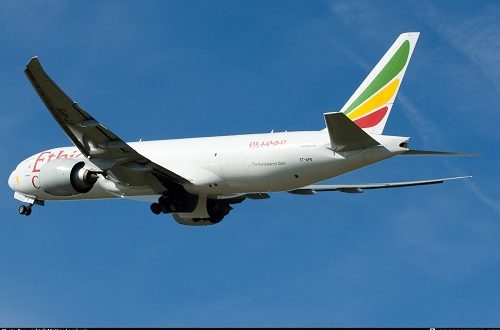 Former President Obasanjo had attended a Stakeholders Dialogue on Continental Trade and Strengthening Implementation of the African Continental Free Trade Agreement (AfCFTA) which ended on Tuesday in Addis Ababa.

According to reports the 5-hour flight from Addis Ababa to Lagos had been smooth until the pilot attempted to land at the Murtala Muhammed International airport where he made a false landing, due to rain and heavy wind, landing on the third touch-line.
The pilot manoeuvred the aircraft and in an attempt to re land the plane causing panic in the cabin, the plane landed in Lagos airport, some 20 minutes after the initial aborted landing.

Nigerianflightdeck is an online news and magazine platform reporting business stories with a bias for aviation and travel. It is borne out of the intention to inform, educate as well as alter perceptions with balanced reportage.
Previous Emirates spice up Nigerian Local Taste, to serve Jollof rice, Porridge yam onboard
Next Ethiopian Airlines, FAAN explain weather-induced mis-approach, say aircraft landed safely