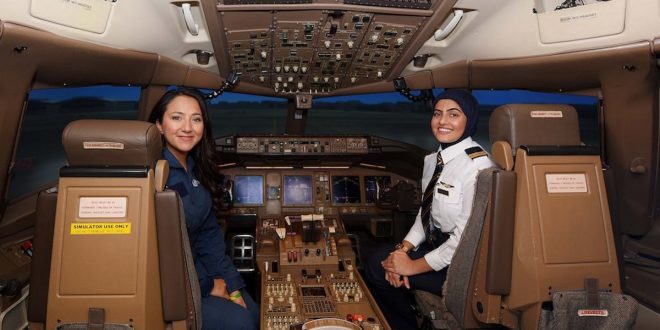 CHAMPIONING the importance of women’s contributions to the growth and development of aviation, Emirates recently hosted Shaesta Waiz for a Boeing 777 simulator challenge in its home base of Dubai.

Waiz is the founder and pilot of Dreams Soar, Inc. (DSI), a non-profit organization whose mission is to inspire and empower young females to become the next generation of STEM (Science, Technology, Engineering and Math) and aviation professionals, through a global outreach mission.  The outreach includes a global solo flight mission, where Waiz is piloting a single-engine Beechcraft Bonanza A36 to circumnavigate the globe.

Waiz stopped in Dubai, one of 34 stops across 18 countries in her five continent journey which will clock in just under 47,000 kilometres upon completion.

Shaesta was met at Emirates Aviation College by Bakhita Al Muheiri, Emirates Boeing 777 First Officer, to test her aerial skills in an Emirates Boeing 777 simulator. Bakhita is one of Emirates’ youngest female Emirati pilots at 24 years. She earned her wings in 2016 and has accumulated over 1,100 flying hours after completing the airline’s National Cadet Pilot Programme.

After a short briefing, Shaesta and Bakhita began their simulator challenge in the Boeing 777 cockpit, taking-off, landing and piloting each assigned journey. Watch both pilots command the Boeing 777 simulator and share their personal experiences here.

Adel Al Redha, Executive Vice President and Chief Operations Officer Emirates airline said: “Through our National Cadet Pilot Programme, we want to grow the next generation of female pilots, by creating an environment that retains, nurtures and values them so they are able to progress and take a wider role within our industry. We also believe that one of the ways to support the need for pilots today is to tap into the female talent pool and inspire them to take their career path into aviation which is one of the most rewarding fields.”

Bakhita Al Muheiri also commented on the simulator experience with Shaesta: “I am truly inspired by Shaesta’s story. As the first civilian female pilot from Afghanistan, she has demonstrated that the world is full of possibilities and when we expose females to a wide range of careers in STEM and aviation we boost their interest to enter fast-moving sectors with a wealth of opportunities.”

Commenting on her twin-engine Boeing 777 simulator challenge, Shaesta said:  “An airplane doesn’t know if you are a girl or boy, what your religion or background is. It reacts based on the input of the pilot. My hope from the time I spent flying the Boeing 777 simulator with Bakhita, learning of her empowering story, and Emirates helping to pave the way for many more young women, is for more role models to devote their time and energy inspiring our next generation.  Let us work together and expend our resources to create brighter futures for our tomorrow.”

Emirates’ female cockpit crew comes from 24 nationalities, covering a diverse age range of 20 to 59 years.  Emirates also has the first Arab woman to Captain the Airbus A380, as well as the youngest Emirati female pilot operating the A380.  Additionally, Emirates employs women who are highly skilled professionals working as aircraft engineers, mechanics and aircraft maintenance and repairs technicians. Women also work in critical positions in flight operations at the airline.

Later in the day, the UAE General Civil Aviation Authority hosted Shaesta in Kidzania at Dubai Mall to speak to young girls and women about her experiences and the Dreams Soar project. Bakhita Al Muhairi and female cadets, Khalid Ali Al Mansoori and Maryam Yousuf Bin Ismail, also gave talks about their aviation journeys in an effort to inspire the young women in attendance.

Nigerianflightdeck is an online news and magazine platform reporting business stories with a bias for aviation and travel. It is borne out of the intention to inform, educate as well as alter perceptions with balanced reportage.
Previous Late Mrs. Adetona goes home Friday, July 28
Next EAN Aviation becomes first West African IS-BAH Stage 1 registered company