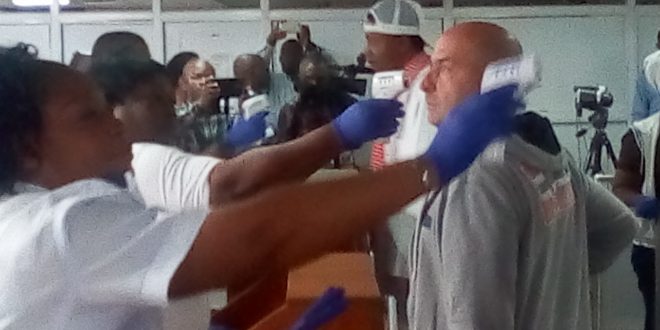 Ebola Outbreak: Screening of inbound passengers still on at airports

NigerianFlightDeck 30th May 2018 Aviation News Comments Off on Ebola Outbreak: Screening of inbound passengers still on at airports 123 Views

EFFORTS to ensure that the dreaded Ebola Disease Virus (EDV) does not find its way into the shores of Nigeria through its major gateways, concerned authorities have put in place more sophisticated methods of tracking and detecting symptoms of the virus as passengers arrive the country.

Nigerianflightdeck.com visited the Murtala Muhammed International Airport (MMIA) where our correspondent watched first hand the screening of inbound passengers on board Kenya Airways flight through collaborative efforts from the Federal Airports Authority of Nigeria (FAAN), Port Health as well as other agencies.

According to feeder reports from Abuja and Kano, the same screening process is being carried out across board and is having maximum impact in tracking passengers and quarantine then for secondary observation.

Technologically speaking, government has put in place a thermal camera, able to pick the passengers and it is being monitored in case there is a spike in the temperature registered on the screen.

This is in addition to the infrared thermometer scanners shaped like hand guns used by officials of the Port Health to scan the passengers individually as they line up.

Ag. General Manager, Medical FAAN, Dr. Ayotunde Kehinde who went through what actually happens during screening said that there are scanners now provided for the initial identification of any communicable disease.

According to him, concerted efforts between FAAN and other medical agencies are in place already and screening is being done as flights come into the Lagos Airport.

” There are scanners provided for the issue of prevention of communicable diseases. The scanners have been mounted already and as the passengers file in the device reads their temperature and body vitals and it is recorded. If the scanner picks up anything higher than normal, the passenger is kept aside for secondary analysis to determine whether it is just a common fever or something higher. This is not like the way it used to be.”

” However, as an airport authority we have also ensured that we do the most important kind of health which is preventive health by installing hand sanitizer around the restrooms and other areas of the airports.”

Uko Eze, from UAE, it is good and a normal thing that people are being screened. They did same in the UAE and they have done same here.”

Nnamdi John who arrived from Dubai via Kenya said he did not experience a screening in Kenya but in UAE he heard of the outbreak in the Congo and was glad he experienced government doing something about it.”

Airport Manager MMIA, Mrs. Victoria Shinaba who spoke to our correspondent on what the airport authority is doing , said the roles have not changed since the last outbreak of the virus and that reports that screening is not asking place is not true stating that the there are two thermal cameras at Delta and Echo Arrival Wings of the airport.

Mrs. Shinaba said that the reports only showed immigration and did not get to the secure area where people are screened further stating that the authority went through a mock exercise and that they

She said, ” we have a Public emergency program in placement that is standard with ICAO practice and we follow that.”

“We also have the Thermal screener since the last Ebola. Once anyone with body temperature is picked. A mock audit was carried out two weeks ago. A passenger came in from Ghana with high temperature and we were able to pick him up”

“We added the thermal so people can see.. Shown immigration screening not port health screening. Assures that no one with anything can come into the country without being seen. We have a public health emergency plan, even at the heat of Ebola we were not isolating people because before you know it will bring spirit of insecurity.”

Nigerianflightdeck is an online news and magazine platform reporting business stories with a bias for aviation and travel. It is borne out of the intention to inform, educate as well as alter perceptions with balanced reportage.
Previous NATOP petition and maligning Tourism personalities
Next At NAIA, FAAN intensifies screening to detect deadly Ebola