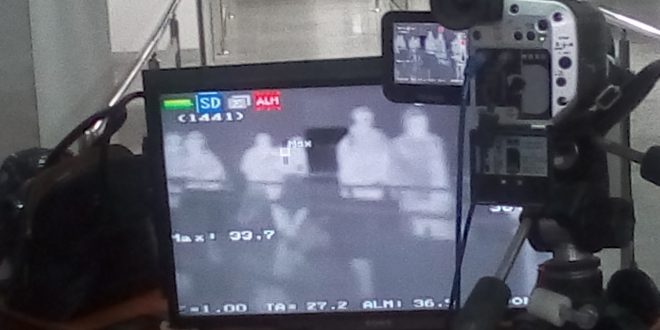 Thermal camera at the screening area of MMIA.

SEQUEL to our report yesterday that government authorities are still carrying out screening to detect the deadly Ebola virus, the Federal Airports Authority of Nigeria (FAAN),has intensified screening for virus.

FAAN, while conducting screening, also said screenings never stopped at any of the airports to detect any communicable diseases including Ebola since its first outbreak in 2014 stating that it decided to increase the degree of the screening after the outbreak of the disease again in the Democratic Republic of Congo which has left 27 people dead.

Our correspondent was on ground yesterday as the screening process of international passengers from Kigali on board RwandAir and Ethiopian airline took place with Port a Health using Thermal camera scanners installed at both the departure and arrival points at the International wing of the airports has two televisions to check the rise in temperature of passengers alongside handheld scanners.

Our reporter further gathered from an official that the temperature was set at 36.9 degree and any temperature higher than the one set would trigger off an alarm which would cause the officials to do a secondary check.

At the arrival points, travel history of passengers were checked through their passport, the vaccination cards to check if the passengers received Cerebral Spinal Meningitis (CSM) vaccine , Polio and yellow fever vaccines.

Regional Manager of FAAN, Sani Mahmud who spoke on efforts by the authority to arrest any eventuality before it sparks off said: “We are at the alert phase of the outbreak. Since the first outbreak in 2014, we never stopped checking our passengers. They were always undergoing screening.”

He also said the airport has not recorded any case of Ebola since the recent outbreak.

Also speaking on the measures put in place, the Deputy General Manager and Head of Aviation Medical Clinics for FAAN, Doctor Adamu Adamu said the airport has also upgraded it hygiene.

On measures put in place at the airport to curb entry of Ebola and other communicable diseases, Adamu said: “Right now, we have public health emergency contingency plan at the airport which we have activated.

“We are at the alert phase now and we are looking at rise in temperature, travel history basically and we have upgraded our sanitation generally at the airport in terms of toilets, we have sanitizers installed at different areas to ensure that passengers that come into Nigeria have facilities to clean up their hands and also washing facilities at the toilet. We also have public health messaging .

“We are sending out information on our Port Health system to the airport on how to prevent communicable diseases because there is an ongoing Ebola outbreak outside the country and we are just trying to make sure that we don’t have an outbreak within the country.

“We are doing this in conjunction with Port Health Services of ministry of health”, he said.

On if anyone with high temperature has been detected so far, he said: “If the scanner detects anyone, the alarm would go off. The scanners have alarm that flags off any temperature that is above the threshold that we set but we have not had any major case of public concern.

He also the scanner have the capacity to capture children.

“All the internationals airports in Nigeria have it presently. We have in Lagos, Abuja, Port Harcourt and Kano. Right now, we are focusing on international airports so as to prevent importation.”

He added that the bulk of the work is for airport officials to be vigilant to detect anyone with any symptoms and imported hygiene.

Nigerianflightdeck is an online news and magazine platform reporting business stories with a bias for aviation and travel. It is borne out of the intention to inform, educate as well as alter perceptions with balanced reportage.
Previous Ebola Outbreak: Screening of inbound passengers still on at airports
Next AON calls on govt to honour zero tariff on aircraft spares, remove VAT