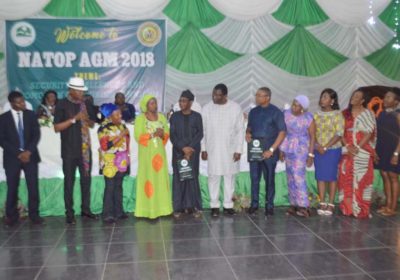 NigerianFlightDeck 29th May 2018 Points of View, Your ViewPoint Comments Off on NATOP petition and maligning Tourism personalities 120 Views

MY attention have been drawn to a widely circulated petition signed by 5 members of NATOP alleging irregularities in the affairs of NATOP. I have been called by a top Government official someone I respect to withhold any further escalation of the issue until it is resolved. He has asked for calmness so I will be restrained in my response. I am forced to respond because the petition was copied to all my clients in Nigeria and    so it looks like a hatchet Job to get Ikechi at all cost after the several demarketing efforts of Akwaaba has failed. It is not only a Nigerian issue.

Try to embarrass him with his international friends seems to be the objective. A childish criminal recording was attached for full dramatic effect. I know of four meetings held last year in Abuja on how to stop Akwaaba in other to launch a new travel Expo in Nigeria. An attempt was made to rubbish the Nigerian media by people who did not attend the event covered by over 40 journalists from all over the country.

I am also alarmed that respected Leaders of the industry were dragged in and rubbished in the petition. The likes of Kabiru Malan two term President of NANTA and former Vice President of NATOP and currently the President of ATPN were rubbished as mere friends of Ikechi because he was inducted into the BOT of NATOP. Iyom Josephine Anenih a founding member of the Federation of Tourism Associations in Nigeria FTAN was also tarred with the same brush.

Gabe Onah the Chairman of the Carnival Calabar Commission who has been former Commissioner of Tourism in his state and superintends over the biggest tourism event in Nigeria is further tarnished because they accepted to serve as BOT of NATOP an association that they have all contributed to build.

Mrs. Garbati is a past President of NATOP a former Deputy President of FTAN, a strong supporter of NATOP and has kept the association from collapsing. She even brought in some of the agitators now tarnishing her name and personality. I noticed in the petition every other sentence had a mention of Ikechi Uko and Akwaaba. I didn’t run for any office before or after. I do not need to defend myself and my contributions to tourism in Nigeria. I will use the trending meme in Nigeria quoting Charles Okocha ” We global now, I have paid my dues and I deserve some accolades.”

The other worrying issue for me is the name of Elder Jemi Alade on the petition. I consider Mr. Alade a legend. He is a pioneer tour operator. We received the Pioneer award from FTAN together so I respect him. He also participated in all high level meetings of NATOP since 2016 and was present all through the events leading to Jos.

What happened in Jos that has necessitated this bile and letter dripping with meanness?
At the Jos AGM 60 members arrived from different parts of Nigeria. The Plateau State Government hosted members to dinner party on Sunday. Monday was the Pre-event Tour of Plateau and three buses were used including two NTDC buses Tour Operators along with the Commissioner of Tourism and Special Adviser of Tourism Plateau State along with Directors of the state took the Operators round the state and ended the day with a reception at Rayfield Resort.

The next day was the AGM proper. It was fully hosted by Plateau State attended by the Deputy Governor and state Executive council and transmitted on State and National media. The President of HATMAN Alhaji Badaki was present along with President of Zoo Keepers association Mr. Andy Ehanire all members of FTAN Board to observe things. After the conference Members went into the Meeting. After reading of minutes and taking Nominations for BOT. The House approved the nominated members without objections. The audited accounts were presented and this created arguments as some members demanded the original copies signed by the appointed Auditors. The Financial Secretary /Treasurer produced the documents and it was adopted by the full house.

The last agenda for the day was elections of New Executives.
Because of the prevailing rumour that the President has procured all the new members to vote for Ime Udo the General Secretary it was agreed that all new members who have spent less than two years should leave the hall. This was resisted by the new members especially by the Abuja members who suspected that it was a ploy by the Lagos people to rig their candidate out of the election

They were persuaded by the President of FTAN Alhaji Rabo Saleh to obey the rules. The election took place after the President stepped down and handed over to the BOT and observers to conduct the election.

Out of the over 50 members present only 10 were eligible to vote or be voted for going by the two year rule.

Coup Attempt
Sometimes last year some members set up a secret WhatsApp group to unseat the Executives and in their words retire all other members and install themselves. They shared the executive positions amongst themselves and set to work in damaging the names of any person perceived to be Strong enough to stop them. They set up a story that the President wants to install the General Secretary as the New President because they came from the same state forgetting that NATOP has an Unofficial Rotation principle. This spawned the whole bad blood that emerged.

In February they arrived at a general meeting with non members and declared the expiration of the tenure of the incumbent Executive. They were overruled and the coup failed. They next spread another story about Insecurity in Jos and that they will not go to Jos because of Herdsmen attack. They contradicted themselves by saying that they will go to Jos for the conference then come to Lagos for the Elections. The executives met and decided to go ahead and accept the offer by the Government of Plateau State to fully Host the AGM.

This offer from Plateau State is the second time in the History of NATOP a state Government is agreeing to host NATOP. The first time was by Madam Onari Duke the first lady of Cross River State under the Presidency of Hajia Fatima Garbati. Every decision of The Executives was approved by Mr. Jemi Alade and Abiodun Sanni who were members of the past Executive council.Plateau State kept their Words and fully Hosted the event which includes 15 Tourism journalists. The attendance of Lagos members to Jos is similar to the Elective AGM held in Calabar in 2016. At the Calabar AGM Members came from everywhere including Benin Republic but only 12 people attended from Lagos. It is the habit of most Lagos Operators to attend to only events held in Lagos. This is not only in NATOP I have also observed that other National Tourism Associations experience more attendance by members outside Lagos whenever the events are held outside Lagos. Jos is in Nigeria and the state Government has offered to help.

The 2017 AGM was held in Lagos and was attended by the Minister of Tourism Alhaji Lai Mohammed along with the top Government Officials. So having held an AGM in Lagos NATOP was happy to move the event to another part of the Country Because a Conspiracy has been spawned and new people drafted and some subsequently deleted when they disagreed with the methods employed. Surprisingly the agitators refused to turn up in Jos except 2. The AGM in Jos was well publicized with 35 stories published on the event by Different media houses. A member who refused to attend the event cannot be seen complaining after the event when they should all have attended and pushed their agenda.

Tourism Agitators
Jemi Alade first used that term in the 1990s when we were all hanging out at his Office. Tourism Agitators are people who have a lot of time so they do nothing in tourism but have enough time to fight within Tourism Associations claiming they can do better. These agitators have killed many vibrant Tourism associations. They always target an association when it seems to be doing well. They never invest in building any association or resurrecting moribund ones as some people are doing but will always target any popular association. They move from One association to another trying to take over.

Akwaaba Travel market is the biggest Professional Travel event in West Africa. In the past year we organised 10 events in 3 countries and all were Successful. We have moved over 1000 people round our events taking care of flights, Visas, accommodation and Land Transportation. So when the President of NATOP calls upon us at the last meeting to help salvage a situation we have always delivered. After being dragged in last year 8 days before the event to arrange the AGM in Lagos Mr. Abiodun Sanni came over to commend us. So when people fail to do their jobs and Akwaaba is contracted to help out we should be commended for always coming in to help.

I am surprised that serial floppers who have failed in successfully organising an event are criticising Akwaaba African Travel market for coming in to help. We are still being owed for last year’s event though part of it was defrayed as dues. I will respond to more of the powers behind the conspiracy in my next letter. Details of the Meeting held at Indaba 2017 and why the next FTAN election is in play and at the root of this crisis.

Nigerianflightdeck is an online news and magazine platform reporting business stories with a bias for aviation and travel. It is borne out of the intention to inform, educate as well as alter perceptions with balanced reportage.
Previous Government mulls provision of 500,000 jobs by 2020- President Buhari
Next Ebola Outbreak: Screening of inbound passengers still on at airports