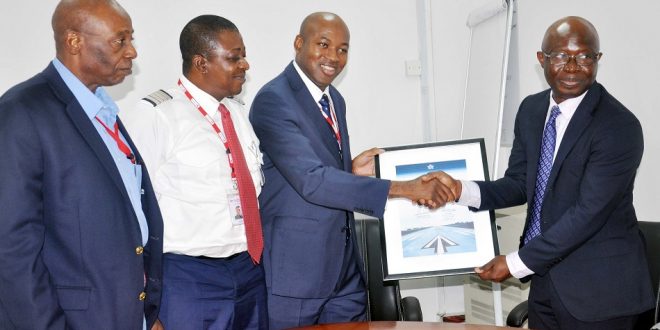 DANA AIR recently celebrated its 9th Anniversary and that was crowned among all its activities with its admission into the International Air Transport Association (IATA) registry, a feat the airline believes will entrench professionalism and character.
Although the aviation industry is fraught with challenges, there is cautious optimism that things will improve and the airline shares that optimism as it embarks on plans to grow its load factor commensurately with plans to grow its fleet and operations .
The airline in a statement by its Chief Operating Officer/Accountable Manager, Obi Mbanuzuo stated that since commencing flight operations on November 10, 2008, the airline has come a long way creating an exemplary model and setting the standards for a sustainable and efficient airline operation in Nigeria.
Mbanuzuo who extolled the airline’s on-time performance, world-class in-flight service and customer-centric innovations said in its nine years, it has not been all smooth sailing.
“We avail this opportunity to wish ourselves many more years in the aviation industry and our desire is to see an aviation industry devoid of the multiple issues that airlines have to grapple with, and improved airport facilities.”
On the airline’s growth plan, Mbanuzuo  said that the most important is to continue operating a safe and operationally efficiency airline and with its admission into the registry of the International Air Transport Association (IATA) it is the perfect start.
Mbanuzuo who was officially presented with the membership certificate of the International Air Transport Association (IATA)
said Dana Air has and will continue to maintain global best practices in the aviation industry while still churning out world-class initiatives to exceed the flying aspirations of its ever-increasing membership of the airlines’ loyalty program –Dana Miles.

‘’Since becoming an IATA member, we have received a barrage of requests for interline and code-share agreements and we can’t wait to take our unrivaled services in Nigeria to the global stage. Dana Air remains uncompromising in its commitment to maintaining global best practices and as always, we will continue to churn out world-class initiatives to meet and exceed the flying aspirations of our teeming guests.’’

On the airlines’ fleet and route expansion plans, Mbanuzuo said that Dana has since 2014 been working on aircraft acquisition  but because of the difficult economy at some point, things changed rapidly.
” We have a fleet improvement plan for a while, we had a plan with banks but when the banking industry had its tremors that affected our plans and for aircraft acquisition, not everything is within our power.”
” However, we are in discussions but these are wide and varying discussions. We are talking with aircraft manufacturers, we are talking to aircraft lessors, we are also talking to aircraft financiers and all these must work together. “
” what we want is to expand sustainably, we are trying to bring our aircraft back. We operate five MD-83s four owned by Dana Air while one is leased. We plan not to discard our fleet but to grow sustainably. Hopefully by 2018 third quarter we may have an additional aircraft o our fleet and by that time the due aircraft on our fleet will go for C-Check and the new acquisition will balance that out.”
‘’our decisions are strategic and is very difficult to forecast in this part of the world, but I can confirm to you that we have commenced talks with some notable aircraft manufacturers and we should increase our fleet in no distant time. Even with our current capacity, we are doing very well and have a strategy to meet the demands of the flying public.’’
In a reaction to what Dana plans for the Yuletide period especially for its flights to the South East and its capacity to handle its teeming flying public, the airline accountable officer it would be able to meet their needs.

” We will operate within our capacities. This business requires steady operational planning that will require you to take little risk. Currently, we are operating 89/90% load factor presently and we are doing well  to get our remaining 10% capacity filled in this Yuletide period. We will handle the capacity .”

“We hear Owerri now has lights  and if more airports have airfield lighting and Instrument Landing System (ILS) airlines can operate late and increase capacity to these routes to meet needs.”
On one of the perennial challenges, one of which is the annually scarcity of Jet A1 (Aviation fuel),  and Mbanuzuo advocated for local refining stating that it’s the only way to bring down the cost of the fuel which cost between N220/N240 per litre in Lagos while the further away from Lagos the product sells for as much as N270.

Nigerianflightdeck is an online news and magazine platform reporting business stories with a bias for aviation and travel. It is borne out of the intention to inform, educate as well as alter perceptions with balanced reportage.
Previous Turkish Airlines announces USD 956 million profit in 2017 Q3 financial results
Next ART tasks government to better manage, invest BASA