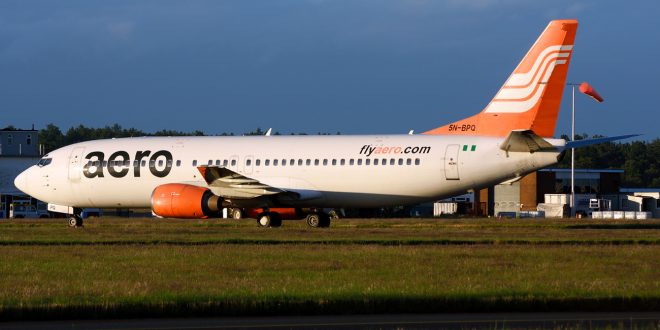 DIRECTOR -General of the Nigerian Civil Aviation Authority (NCAA), Capt. Musa Nuhu, has maintained that the pilot of Aero Contractor Flight NIG382 which suffered a bird strike on take-off followed the books and acted professionally in returning to base after the incident at the Port Harcourt International Airport (PHIA), Omagwa.

A bird strike also described as bird ingestion or bird aircraft strike hazard is a collision between an airborne animal (usually a bird) and a moving vehicle, usually an aircraft where birds are ingested in the aircraft engine usually causing damage to the aircraft as in Aero’s case which was the aircraft blade.

Captain Nuhu who expressed his view on the incident in a phone conversation said that the aircraft, a Boeing 737-500 with the registration number 5N-BKR, was heading to Nnamdi Azikiwe International Airport (NAIA), Abuja before the incident on Monday afternoon.

Nuhu explained that the pilot made a circuit and returned to base within eight minutes after the incident, maintaining that the action of the pilot was in order.

The aircraft had departed PHIA for Abuja with 91 souls onboard; 85 passengers and six crew members at 2:06pm and returned to base at 2:14pm.

Nuhu explained further that Aero Contractors brought another aircraft to airlift the passengers to Abuja within 90 minutes of the incident, stressing that the damaged part of the aircraft was undergoing repairs in Port Harcourt.

He said: “Boeing 737-500 aircraft with the registration number: 5N-BKR belonging to Aero Contractors departed Port Harcourt to Abuja, but, during takeoff, it had a bird strike and the pilot continued the take-off, made a circuit and returned to land.

“That is what is supposed to be done. Pilots are trained for that. At the point he had the bird strike, he could not abort the takeoff. So, he continued with the takeoff and returned to base. They restarted the engine and discovered that some parts of the blades were damaged. Within 90 minutes, Aero Contractors came with a different aircraft to rescue the passengers.

“As we speak, maintenance is going on to fix the damaged blade and when they finish, NCAA inspectors will inspect it and certify it if all the parameters; engines, blades and others are okay, they will be released for flight.”

Nigerianflightdeck is an online news and magazine platform reporting business stories with a bias for aviation and travel. It is borne out of the intention to inform, educate as well as alter perceptions with balanced reportage.
Previous IPIAAM, BAGAIA trains 24 participants on basic aircraft accident investigation
Next Authorities to meet as another bird strike hits Max Air Kano-Abuja flight with Kano Emir