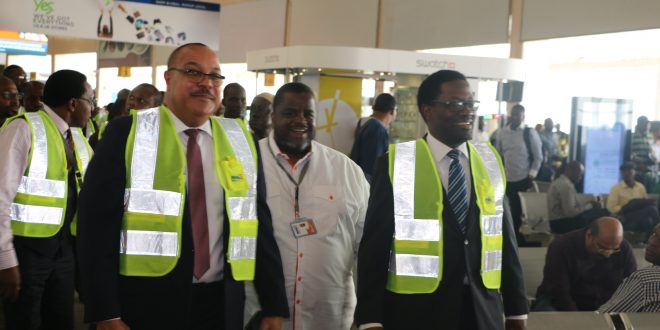 Bi-Courtney appeals to NCAA to restore approval for regional operations

Managing Director of BASL, Captain Jari Williams who spoke today at the MMA2 while on a facility tour with reporters stated that the regulatory agency had granted approval twice only to revoke it a day to the commencement of operations twice.

On the recommendation of the International Civil Aviation Organisation (ICAO) that prevented local and international passengers from mixing in the same terminal, Williams said that several countries around the world had improved on the recommendation and today operate both flights from same terminal.
He specifically mentioned Nnamdi Azikiwe Airport and Port Harcourt Airport in Abuja and Port Harcourt respectively as two of the airports local and international passengers are processed from the same terminal.
Apart from this, he also mentioned Heathrow Airport in London, Kotoka International Airport, Accra, Ghana and Benin Republic Airport as some of the countries where local and international passengers are still processed from the same terminal, stressing that Nigeria could not be an exception.
He said: “Aviation is a very dynamic industry. How many airports still separate regional from domestic operations? If a country decides to have international and local, I don’t think there is any problem about that. Anyone that is still saying that they do passenger separation is doing 1950 aviation.
“In order to ease passenger experience, we had it in our agreement that there should be a rail link between international and local airports, but what do we have today? Some people ensure that it didn’t see the light of day.”

BASL also canvassed fit the implementation of the exclusivity clause on its concession agreement stating that it has lost 50% of its revenue to its inability to operate regional operations and Federal government’s operation of the GAT, stressing that only 65 per cent of its 45 check-in counters are put into use.

“We  want FAAN to give us exclusivity that all local flights must emanate from the MMA2 that is our major bane. Since the terminal was opened 50% of passengers have operated from elsewhere not  MMA2 and this has frustrated us as government is competing with us.”

On the impasse between MMA2 and the Federal Government, the BASL management stated that they are not opposed to an amicable settlement especially as they have explored all the options  and are yet to make headway.

“We are open to an amicable settlement as we have gone through all the legal processes. We have gone to arbitration and the issue has been resolved in our favour but the Federal Government has not respected the court order.”

Captain Williams disclosed further that Arik Air, which hitherto refused to operate from the terminal had about a month ago, commenced charter flight operations from MMA2, stressing that as a business organisation, BASL would continue to engage the airlines and others to operate from its terminal as enshrined in the contractual agreement.

He declared that the facility, which had the capacity to process about four million passengers per annum with room for enhancement, only handles two million passengers at the moment.
The Legal Counsel of BASL, Mr. Tola Oshobi (SAN) also maintained that Bi-Courtney was open to re-negotiation with the Federal Government on the naughty areas in its concession agreement and hope that the government would be willing to reach an agreement with it.
He added: “The original agreement we had with the government for the operation of the terminal was just 12 years, but then, that terminal was supposed to be a warehouse. But, with the enormous resources and finance we put into this facility (MMA2) where you have never have a total blackout in the past 10 years of their operations, for example, which included regional operations, the government of former President Olusegun Obasanjo approved 36 years for us.
“When we had issues with it, former President, the late Umaru Yar’Adua called FAAN and Bi-Courtney together and told them (FAAN) to obey the agreement the government had with us. But since then, FAAN has been going to one court or the other and we have always got favourable judgments against the government.”

Nigerianflightdeck is an online news and magazine platform reporting business stories with a bias for aviation and travel. It is borne out of the intention to inform, educate as well as alter perceptions with balanced reportage.
Previous Participants showcase UAV demo at AVI Afrique Summit
Next NAMA Director, Gabriel Apen buries wife, Comfort, in Benue