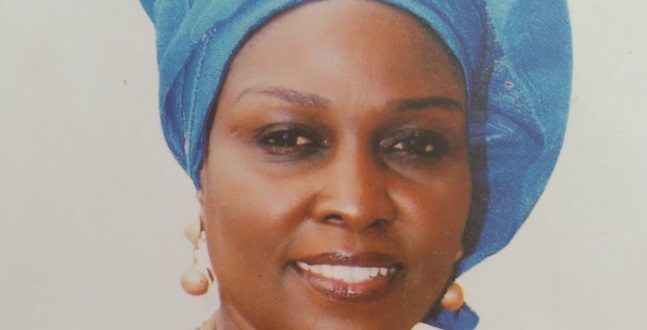 AVIATION community and sympathizers across the country thronged the village of Gbem in Vandeikya Local Government Area of Benue State for the final burial rites of late Mrs Comfort Ngozi Akpen, the deceased wife of NAMA Director of Operations, Mr Gabriel Akpen.

The funeral programme which commenced with a service of songs on Thursday, the 2nd of November, 2017 at the Roman Catholic Missionary School, Kpariv, Gbem was attended by friends, family, NAMA staff and colleagues of the deceased at the Federal Airports Authority of Nigeria (FAAN).

The funeral service on Friday attracted even a larger army of sympathizers mostly from the aviation community who besieged the Akpen country home to pay their last respect to their fallen colleague.  In the words of the officiating priest, Rev. Fr. Gregory Uga, Parish priest of Gbem Rectory, Diocese of Gboko, the late Comfort Gbem was an adorable parishioner and upright daughter of the community whose devotion to the service of God and humanity is worthy of emulation.

The Managing Director of NAMA, Capt. Fola Akinkuotu, represented by the Director of Safety Electronics and Engineering Services, Engr. Farouk Umar, in his remarks said late Mrs Akpen was a dedicated wife and caring mother and who spared nothing to see to the good upbringing of her children, even as he prayed God to grant the family the fortitude to bear the loss.

Thereafter, she was admitted into the Institute of Management and Technology, (IMT) Enugu where she earned a Higher National Diploma (HND) in Secretarial Administration.

Between that time and her demise recently, she had the opportunity to serve her fatherland in several other airports across the country. Aged 51, the late Comfort Akpen who died on Friday, the 22nd of September, 2017 is survived by her husband, Gabriel Akpen and three children.

Nigerianflightdeck is an online news and magazine platform reporting business stories with a bias for aviation and travel. It is borne out of the intention to inform, educate as well as alter perceptions with balanced reportage.
Previous Bi-Courtney appeals to NCAA to restore approval for regional operations
Next Emirates celebrates acquisition of 100th A380 to its fleet