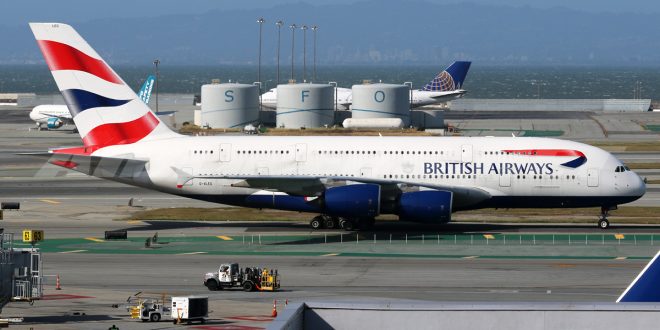 BRITISH AIRWAYS  has joined the teeming number of airlines that is refusing to operate from the Kaduna Airport after the closure of the Nnamdi Azikiwe International Airport (NAIA), Abuja on March 8, 2017.

The United Kingdom carrier has joined the likes of South African Airways (SAA), Lufthansa, KLM-Air France and a host of other airline that have refused to operate from Kaduna citing safety and security challenges as well as other logistic issues.

The airline in a response to their planned operations  or in-operations into Kaduna Airport through their country manager, Mr. Kola Olayinka said that it plans to assess its best options for its customers during the closure period of the runway.

The response goes,”I can confirm that BA will not be operating to Kaduna during the planned closure of the Abuja Airport. Many factors were considered before this decision was reached, major ones are concerned about the safety and security of our passengers as well as difficulties around some key operational issues. We are currently evaluating all options for our customers planning to travel at that time and we will be reaching out directly to them for information about their trip”.

Other than the reason, Olayinka explained  that catering services as well as the adequate technology were not in Kaduna including simple tech like the Common User Terminal Equipment among others.

A BA statement made available further explained: “We have been informed that the runway at Nnamdi Azikiwe International Airport in Abuja will be closed for extensive repairs between March 7, 2017 and April 19, 2017.  Unfortunately this means that we have to cancel all flights to/from the airport for that period of time. Customers who are affected are being contacted and offered a choice of three options:  A full refund; Rebook their flight to/from Abuja to an alternative date when the airport is open (before or after the runway repairs have been undertaken).Rebook their flight to/from Abuja to/from an alternative city of Lagos or Accra.”

“We are awaiting more information from the authorities in Nigeria and at this stage we hope that we can restart our normal flight schedules from Heathrow to Abuja on the evening of April 19 and from Abuja to Heathrow the following morning on April 20, 2017. We will update this story as we receive more information about the runway repairs in the coming weeks.”

Recall that BA had on Monday explained that it would soon be reaching out to the Nigerian government to give an official response to whether or not it would move its operations to Kaduna from Abuja.

On Monday Nigerianflightflight.com reported  that South African Airways (SAA) wrote a letter to the Minister of State for Aviation, Senator Hadi Sirika informing him that it would seize flight operations to Abuja on the 6th March, 2017 days before the closure of the airport.

Our correspondent cited a letter from SAA to the Minister signed by the Ag. Chief Commercial Officer, SAA, Mr. Aaron Munetsi, stating that the airline would suspend its operations to Abuja from March 6 until April 18, 2017.

The letter read in part: “SAA commends the Nigerian authorities concerning the planned repairs of the NAIA runway. However, due to network and fleet operations planning, SAA regrets to advise that the airline will suspend its Abuja operations with effect from 6th March until the 18th April, 2017.

“The airline promised to be in constant touch with the Nigerian aviation authorities as the repair work progresses in order to establish its readiness for revised operations in accordance with the work schedule.”

A Lufthansa source who confirmed the airlines planned withdrawal from Abuja following the runway closure said,” There are no plan to operate to Kaduna Airport by the airline. We will soon suspend our operations to Abuja and return to the airport once it is re-opened for flight operations. We don’t have any codeshare arrangement with any Nigerian airline at least for now.

“So, for those who have already book ahead, we will give them alternatives, which is either Lagos or Port Harcourt that we still fly into in the country. We will offer them ‘no fee booking option,’ which is the industry standards and if any passenger still doesn’t want to fly with .

Nigerianflightdeck is an online news and magazine platform reporting business stories with a bias for aviation and travel. It is borne out of the intention to inform, educate as well as alter perceptions with balanced reportage.
Previous Meridiana Fly, Dana Air partnership reaffirms commitment to Nigerian, Ghana market
Next Mamajsaviationblog, CheckinNigeria host first Cabin Crew Fair in Nigeria