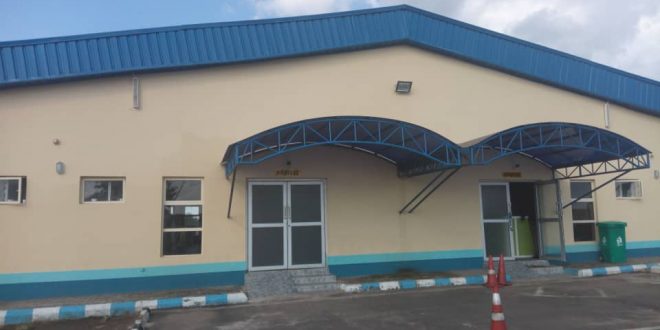 HOPES are high that if government includes the abandoned Akure Airport Cargo Terminal in next year’s budget to get contractors back to site, recorded interests in the transportation of perishable goods from the airport will become an actuality, according to the Airport Manager, Mrs Cecilia Oguama.

This is just as she said passenger traffic at the airport has increased tremendously especially with the commencement of flight by Air Peace following a partnership arrangement between the airline and the Ondo State government.

Mrs. Oguama who spoke to reporters briefly about the cargo terminal said interest in the transportation of perishable goods has increased in the area and expressed hope that the abandoned cargo airport will be included in next year’s budget to get the contractors back to site.

Her thoughts are that the increase of the transportation of perishable goods will help further diversify and boost the economy of the state.

She said,”We have suppliers coming to make enquiries about the cargo airport, this is a known for agriculture and most of their produce are taken by road. So they come to the airport for enquiries on the transportation of their goods”, Oguama said.

On the increase in passenger figures, Mrs Oguama, explained that before now, the airport recorded low traffic of about 20 passengers but was excited that passengers’ traffic has increased.

She said “it has increased tremendously, there was a time we were having ten, twenty but right now we are having passengers in thousands, and four thousand, five thousand per month”

On the new terminal building which was put into use about two months ago, Mrs Oguama explained that, with the sitting capacity of 100, airports users find the terminal more comfortable now.

With category 06 fire tender at the airport, Mrs Oguama said the airport has been able to attend to fire incidents in the state which has attracted commendations from the Ondo State government.

“About four times, we have been able to assist them at night outside the airport when it doesn’t impede on our operations”, the airport manager emphasised.

While commending the Management team of Federal Airports Authority of Nigeria (FAAN) for the quick response to issues at the airport, she said grass cutting has remained the greatest challenge at the airport.

Unlike other airports, Oguama revealed that the airport enjoys public power supply but noted that the voltage was always fluctuating.

The Akure airport boss expressed joy that the cashless transactions was working perfectly at the airport, saying that POS was available and commended the government for the introduction of cashless payment system which has further boosted “Ease of Doing Business” at the airports across the country.

Nigerianflightdeck is an online news and magazine platform reporting business stories with a bias for aviation and travel. It is borne out of the intention to inform, educate as well as alter perceptions with balanced reportage.
Previous Nigeria Immigration apprehends another four Ghanaian females for human trafficking at MMIA
Next ATSSSAN NCAA branch insists foreign training cannot be domesticated