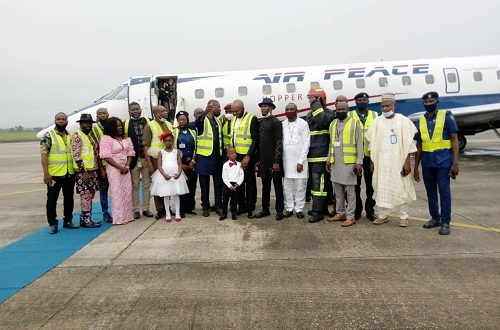 FLIGHT operations at the Osubi Airstrip in Delta State got a boost on Friday, seventeen months after it was shutdown as Air Peace started flights into the airport amidst cheers from traditional rulers, staff of the Federal Airports Authority of Nigeria, FAAN, and other dignitaries.

The Air Peace Embraer 145with registration marks 5N-BUZ piloted by Captain Matthew Ekeinde touched down at the airport with total of 45 passengers at 08:45am amidst the Federal Airports Authority of Nigeria (FAAN) water canon salute.

Speaker of the Delta State House of Assembly, Rt Hon Sheriff Oborevwori at a brief ceremony at the Airport over the flight resumption, said reopening of the airport over one year after its shutdown was a milestone for the state.

” Unfortunately, following a controversy involving aviation service providers and management of the Airport, it was closed in February 2020. We are here gathered to witness the reopening of the Osubi Airport by the Federal Government. To me, this is a milestone for the State and Okpe Local Government Area in particular. “, he said.

” In 2015, the number of passengers movements into the Airport, according to the Federal Airports Authority of Nigeria (FAAN) Aviation Sector Reports, was 187,630(one hundred and eighty-seven thousand, six hundred and thirty). I believe this figure would be more as at the date the Airport was shut down. “, he said.

The Airport Manager, Mr. Winston Egwuatu said that Air Peace is the only commercial airlines operating in the airport at the moment  but there were three others flying from  Lagos, Abuja, adding that more busy routes would soon be added.

Continuing, he said the airlines Aero, Arik and United Nigeria are commercial airlines gearing up to add Osubi to their routes.

Recall, the Osubi Airport was shut down by the President, Muhammad Buhari in February 7, 2020 and was officially reopened in May 25, 2021 as FAAN had taken over operatorship from Shoreline Oil Services on 29th March.

A staff of the Osubi Airport who spoke to NigerianFLIGHTDECK under conditions of anonymity said,” Flight operations means so much, immediately after the pronouncement on the 7th February 2020 some of the staff had a meeting where FAAN was given the mandate to steer this Osubi operations in February and it has not been easy but with the arrival of Air Peace on daily commercial services from Lagos to Osubi and to Abuja, it is an occasion we would live to remember. Covid-19 thought me a lesson that if you don’t have aircraft flying or have passengers, then you can’t say you have an airport

Nigerianflightdeck is an online news and magazine platform reporting business stories with a bias for aviation and travel. It is borne out of the intention to inform, educate as well as alter perceptions with balanced reportage.
Previous Ibom Air apologizes to customers on Lagos-Abuja route over delay
Next NAAPE insists technology transfer, skills are benefits of E195 acquisition for local engineers